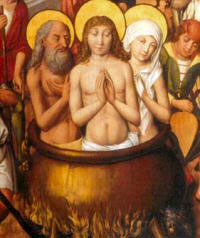 St. Crescentia, Vitus and Modestus were Christians who gave their live for the Faith in the Roman province of Lucania, in southern Italy. Crescentia was Vitus' attendant. They were racked on the iron horse until their limbs were dislocated. At this juncture, a great storm arose which destroyed many temples, killing a multitude of pagans. An angel now descended from heaven, set the martyrs free, and led them back to Lucania, where they peacefully expired, worn out by their sufferings. Their feast day is June 15th.