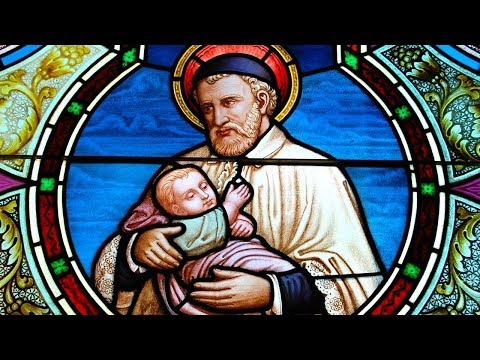 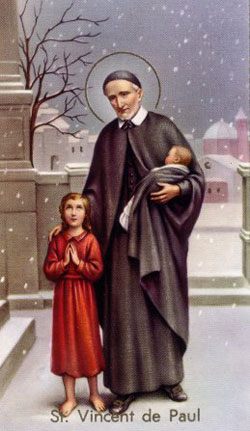 St. Vincent de Paul was born to a poor peasant family in the French village of Pouy on April 24, 1581. His first formal education was provided by the Franciscans. He did so well, he was hired to tutor the children of a nearby wealthy family. He used the monies he earned teaching to continue his formal studies at the University of Toulose where he studied theology.

He was ordained in 1600 and remained in Toulose for a time. In 1605, while on a ship traveling from Marseilles to Narbone, he was captured, brought to Tunis and sold as a slave. Two years later he and his master managed to escape and both returned to France.

St. Vincent went to Avignon and later to Rome to continue his studies. While there he became a chaplain to the Count of Goigny and was placed in charge of distributing money to the deserving poor. He became pastor of a small parish in Clichy for a short period of time, while also serving as a tutor and spiritual director.

From that point forward he spent his life preaching missions to and providing relief to the poor. He even established hospitals for them. This work became his passion. He later extended his concern and ministry to convicts. The need to evangelize and assist these souls was so great and the demands beyond his own ability to meet that he founded the Ladies of Charity, a lay institute of woman, to help, as well as a religious institute of priests - the Congregation of Priests of the Mission, commonly referred to now as the Vincentians.

This was at a time when there were not many priests in France and what priests there were, were neither well-formed nor faithful to their way of life. Vincent helped reform the clergy and the manner in which they were instructed and prepared for the priesthood. He did this first through the presentation of retreats and later by helping develop a precursor to our modern day seminaries. At one point his community was directing 53 upper level seminaries. His retreats, open to priests and laymen, were so well attended that it is said he infused a "Christian spirit among more than 20,000 persons in his last 23 years."

The Vincentians remain with us today with nearly 4,000 members in 86 countries. In addition to his order of Vincentian priests, St. Vincent cofounded the Daughters of Charity along with St. Louise de Marillac. There are more than 18,000 Daughters today serving the needs of the poor in 94 countries. He was eighty years old when he died in Paris on September 27, 1660.He had "become the symbol of the successful reform of the French Church". St. Vincent is sometimes referred to as "The Apostle of Charity" and "The Father of the Poor".

His incorrupt heart can be found in the Convent of the Sisters of Charity and his bones have been embedded in a wax effigy of the Saint located at the Church of the Lazarist Mission. Both sites are located in Paris, France.

Two miracles have been attributed to St Vincent - a nun cured of ulcers and a laywoman cured of paralysis. As a result of the first, Pope Benedict XIII beatified him on August 13, 1729. Less than 8 years later (on June 16, 1737) he was canonized by Pope Clement XIII. The Bull of Canonization recognized Vincent for his charity and reform of the clergy, as well as for his early role in opposing Jansenism.

It has been reported that St. Vincent wrote more than 30,000 letters in his lifetime and that nearly 7,000 had been collected in the 18th century. There are at least five collections of his letters in existence today.

The feast day for St. Vincent, the patron of all charitable societies, is September 27. 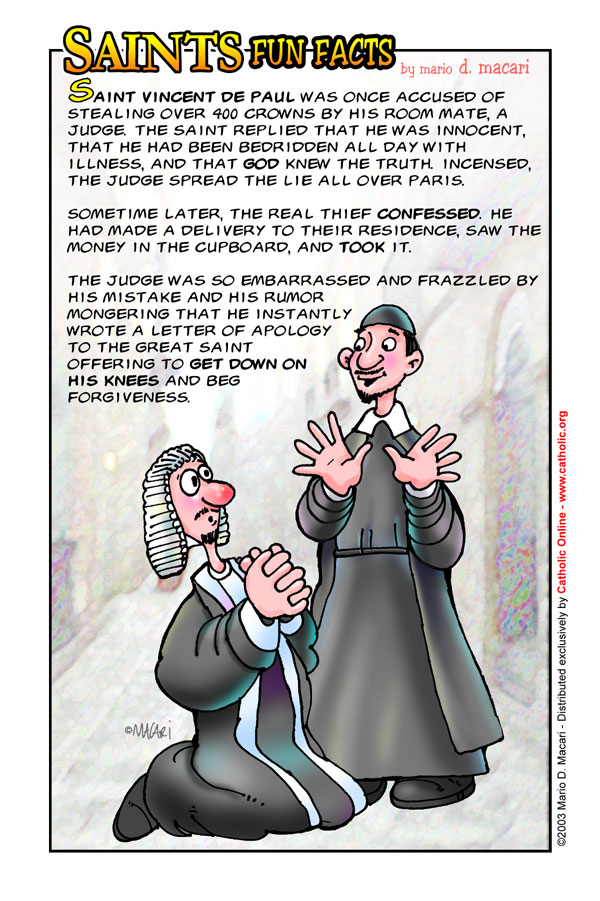