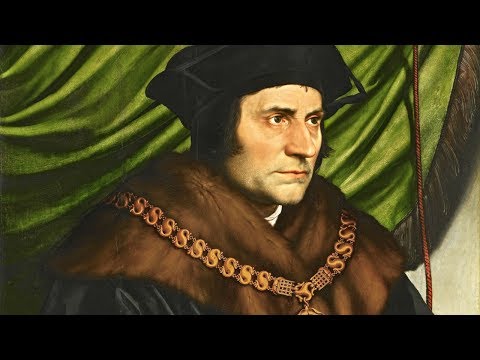 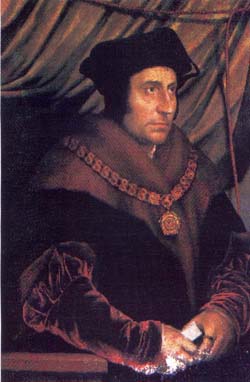 Thomas More was born in London on February 7, 1478. His father, Sir John More, was a lawyer and judge who rose to prominence during the reign of Edward IV. His connections and wealth would help his son, Thomas, rise in station as a young man. Thomas' mother was Agnes Graunger, the first wife of John More. John would have four wives during his life, but they each died, leaving John as a widower. Thomas had two brothers and three sisters, but three of his siblings died within a year of their birth. Such tragedies were common in England during this time.

It is likely that Thomas was positively influenced from a young age by his mother and siblings. He also attended St. Anthony's School, which was said to be one of the best schools in London at that time. In 1490, he became a household page to John Morton, the Archbishop of Canterbury and Lord Chancellor of England. Archbishop Morton was a Renaissance man and inspired Thomas to pursue his own education.

Thomas More entered Oxford in 1492, where he would learn Latin, Greek and prepare for his future studies. In 1494, he left Oxford to become a lawyer and he trained in London until 1502 when he was finally approved to begin practice.

Almost as soon as More became a lawyer, he found himself contemplating another path in life. For two years, between 1503 and 1504, More lived next to a Carthusian monastery and he found himself called to follow their lifestyle of simple piety. He often joined their spiritual exercises.

By 1504, More had decided to remain in the secular world, and stood for election to Parliament. But he did not forget the pious monks who inspired his practice of the faith.

Thomas More married his first wife, Jane Colt in 1505. They would have four children together before her death in 1511. Their marriage was reportedly happy and Thomas often tutored her in music and literature.

After Jane's death in 1511, Thomas quickly remarried to Alice Harpur Middleton, who was a wealthy widow. Alice was not particularly attractive, and her temperament was less docile than Jane's. The wedding took place less than a month after Jane's passing and was poorly received by his friends.

It was rumored that Thomas married her because he wanted a stepmother for his four children, and she was a woman of wealth and means. It is believed the pair knew each other for some time prior to their marriage. They would have no children together. Thomas accepted Alice's daughter from her previous marriage as his own.

Thomas was considered a doting father, and he often wrote letters to his children when he was away on work. He also insisted that his daughters receive the same education as his son. His daughters were well known for their academic accomplishments.

In 1504, More was elected to Parliament to represent the region of Great Yarmouth, and in 1510 rose to represent London. During his service to the people of London, he earned a reputation as being honest and effective. He became a Privy Counselor in 1514.

More also honed his skills as a theologian and a writer. Among his most famous works is "Utopia," about a fictional, idealistic island society. The work is widely regarded as part satire, part social commentary, part suggestion. Utopia is considered one of the greatest works of the late Renaissance and was widely read during the Enlightenment period. It remains well by scholars read today.

From 1517 on, Henry VIII took a liking to Thomas More, and gave him posts of ever increasing responsibility. In 1521, he was knighted and made Under-Treasurer of the Exchequer.

The King's trust in More grew with time and More was soon made Chancellor of the Duchy of Lancaster, which gave him authority over the northern portion of England on behalf of Henry.

More was immediately effective, working with speed and precision that is admired today. He was likely one of Henry VIII's most effective servants, and was fiercely loyal to the king.

During his tenure as Lord Chancellor, More prosecuted those accused of heresy and worked tirelessly to defend the Catholic faith in England. This was an arduous, but achievable task as long as he enjoyed Henry's favor. However, in 1530, as Henry worked to obtain an annulment from his wife, Catherine, More refused to sign a letter to the Pope, requesting an annulment. This was More's first time crossing Henry.

The relationship between More and Henry became strained again when seeking to isolate More, Henry purged many of the clergy who supported the Pope. It became clear to all that Henry was prepared to break away from the Church in Rome, something More knew he could not condone.

In 1532, More found himself unable to work for Henry VIII, whom he felt had lost his way as a Catholic. Faced with the prospect of being compelled to actively support Henry's schism with the Church, More offered his resignation, citing failing health. Henry accepted it, although he was unhappy with what he viewed as flagging loyalty.

In 1533, More refused to attend the coronation of Anne Boylen, who was now the Queen of England. More instead wrote a letter of congratulations. The letter, as opposed to his direct presence offended Henry greatly. The king viewed More's absence as an insult to his new queen and an undermining of his authority as head of the church and state.

Henry then had charges trumped up against More, but More's own integrity protected him. In the first instance, he was accused of accepting bribes, but there was simply no evidence that could be obtained or manufactured. He was then accused of conspiracy against the king, because he allegedly consulted with a nun who prophesied against Henry and his wife, Anne. However, More was able to produce a letter in which he specifically instructed the nun, Elizabeth Barton, not to interfere with politics.

On April 13, 1534, More was ordered to take an oath, acknowledging the legitimicies of Anne's position as queen, of Henry's self-granted annulment from Catherine, and the superior position of the King as head of the church. More accepted Henry's marriage to Anne, but refused to acknowledge Henry as head of the church, or his annulment from Catherine. This led to his arrest and imprisonment. He was locked away in the Tower of London.

He faced trial on July 1 and was convicted by a court that included Anne Boylen's own father, brother and uncle, hardly an impartial jury. Still, More had one thing going for him. He could not break the law of which he was accused if he remained silent. However, he had no defense against treachery, and several dubious witnesses were able to contrive a story that he had spoken words that had the same effect as treason.

Despite a brilliant defense of himself and persuasive testimony, grounded in truth and fact, More was convicted in fifteen minutes. The court sentenced him to be hanged, drawn, and quartered, which was the traditional punishment for treason.

Henry was pleased with the outcome, although likely upset that one of his favorite advisers refused, even upon pain of death, to sanction his annulment and break from Rome. Henry was a Machiavellian king and while he may have regretted the loss of More, he was more intent upon retaining his authority.

As a final act of mercy, Henry commuted More's punishment to mere decapitation.

More ascended the scaffold on July 6, 1535, joking to his executioners to help him up the scaffold, but that he would see himself down. He then made a final statement, proclaiming that he was "the king's good servant, but God's first."

Following his death, it was revealed that More wore a hair shirt, a garment destined to be itchy, and worn to as a sign of atonement and repentance. It became obvious to all that he was a man of deep piety, asceticism, voluntary self discipline, and penitence.

More's decapitated body was buried in the Chapel of St. Peter ad Vincula at the Tower of London, in an unmarked grave. His head was put on display, but his daughter Margaret possibly bribed someone to take it down. The skull may be in the vault of a church in Canterbury.

Thomas More has been widely remembered as a man of tremendous integrity, and he has since been described as a martyr and canonized a saint.

He is the patron saint of adopted children lawyers, civil servants, politicians, and difficult marriages. 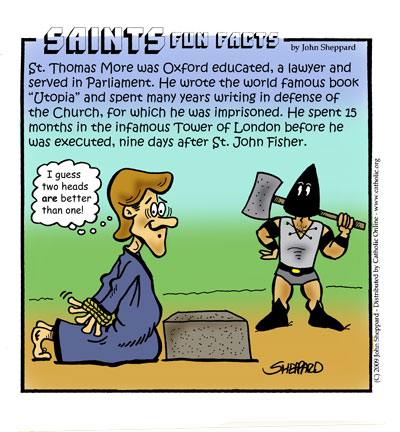