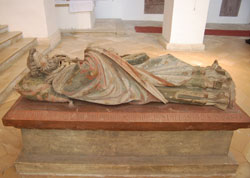 Benedictine abbot martyred by a member of his own monastery. Erminold was given to Hirschau Monastery, in Wurzburg Germany, as a small child. In 1110, he became the abbot of Lorsch, resigning and returning to Hirschau when his election was disputed. In 1117, Erminold became abbot of Pruffening There he was assaulted by a lay brother and slain on January 7.