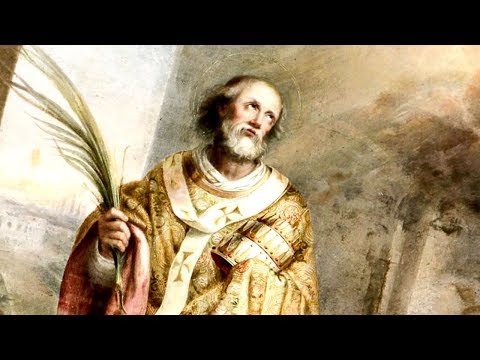 Saint Leo the Great, also known as Pope Saint Leo I, was born into a Roman aristocratic family. His response to the call of the Lord transformed him into one of the greatest popes of Christian history. In fact, he was the first pope to be given the title "the Great." Details pertaining to Leo's place of birth are not known, but it is believed his ancestors come from Tuscany.

St. Leo the Great became a very well-known deacon of the Church by 431, serving the church under the pontificate of Pope Celestine I. Leo was widely respected for his love for the Lord, intelligence and persuasive nature. He was also gifted in bringing reconciliation between disputing groups of Christians.

That is why he was often sent out to settle disputes, both secular and theological. Following the pontificate of Pope Celestine, the next Pope was Pope Sixtus III.

Pope Sixtus III passed away while Leo was visiting Gaul at the request of Emperor Valentinian III. His task was to bring peace between one of Gaul's chief military commanders and the chief magistrate. Leo was then unanimously elected as the next pope to succeed Pope Sixtus III in 440. His swift election reflected the respect he had garnered among the people from his service to the Lord and the affection the faithful had this pastoral and wise servant of the Lord.

Pope Leo was deeply dedicated to his service as pope. He saw himself as privileged to sit in the Chair of St Peter, as the servant of the servants of God. He worked diligently as "Peter's successor." Over time, Leo became known as one of the best administrative popes of the ancient Church. But, he was so much more.

During his reign, he tirelessly fought to preserve the unity of the Church and its faith; and to ensure the safety of his people against invasions from armies which sought to destroy the Church and the Christian influence on culture which she brought to bear.

Pope Leo I focused his pontificate on four main areas. He continuously worked to oppose and root out numerous heresies which were threatening the Western Church. Among them were Pelagianism, which involved denying Original Sin and failing to understand the necessity of God's grace for salvation.

At the foundation of the Pelagian error was the mistaken notion that we can perfect ourselves without God's grace and assistance.

The other major heresy threatening the Church was Manichaeism.

This heresy denied the goodness of the human body, creation, and even matter itself. It failed to understand the full implications of the Incarnation of Jesus Christ. In fact, it denigrated the human body. In short, it viewed everything material as evil. That denies the very teaching of the Hebrew Scriptures and the New Testament. It also rejects the very heart of the Gospel message.

Pope Leo I was a great defender of the orthodox teaching of the Catholic Christian Church and protected the full deposit of faith. The whole Church is still indebted to him for this.

During this same period, some Eastern Christians began questioning the teaching of the Church concerning the relationship between Jesus' humanity and his divinity, and how to articulate this mystery of the Christian faith.

In response, Leo resolved the doctrinal controversy with a letter setting down the Church's official teaching on Jesus Christ as One Person with a human and a divine nature which could not be separated. This profound and theologically astute letter reconciled the disputing parties. It preserved the core teaching concerning Jesus Christ. Finally, it affirmed the fullness of what occurred in the Incarnation, as well as its implications for all men and women who are baptized into Jesus Christ.

To this day, Leo's letter is heralded and praised, not only for bringing peace, but for preserving the fullness of Christian truth and doctrine. It helped the whole Church enter more fully into the heart of the Gospel message of who Jesus is - and who we can become in Him, as we cooperate with grace.

Along with his dynamic faith and outstanding theological wisdom, Pope Leo I was also courageous. He led Rome's defense against Attila the Hun's barbarian invasion on Italy in 452, by taking on the role of peacemaker.

Pope St Leo focused heavily on the pastoral care of his people. He inspired and helped to foster charitable work in areas of Rome affected heavily by famine, refugees and poverty. To him, being a Christian was not only about embracing the fullness of the Gospel theologically but living it out in a world filled with hurt, suffering and needs.

Pope Leo I was renowned for his profoundly spiritual sermons. With his words, Leo could reach the everyday needs and interests of his people. It was his reputation as an "instrument of the call to holiness, well-versed in Scripture and ecclesiastical awareness" that helped him become one of the greatest popes in the history of the Church.

Leo died on November 10, 461. He wished to be buried as close as possible to St. Peter's tomb. His body was first laid in the entrance of St. Peter's basilica but was later moved inside the basilica in 688.

Pope Leo I's papacy has been described as one of the most important in the Church's history. Nearly 100 sermons and 150 letters of Leo I have been preserved; one of them is still, to this day, used in the Office of Readings on Christmas.

In 1754, Pope Benedict XIV proclaimed Leo I a Doctor of the Church. Pope Leo I faithfully and unequivocally held to the belief that everything he did and said as pope represented Jesus Christ, and St. Peter. He discharged his office, and vocation, with dynamic faith, great pastoral care and excellence. His feast day is celebrated on November 10. 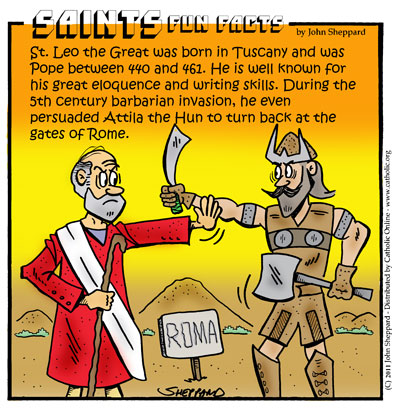