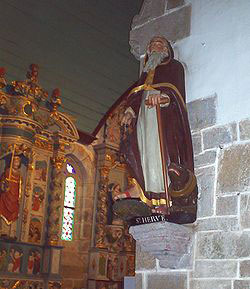 Welsh bard who was is a popular patron in Brittany, France. Herve, sometimes called Harvey or Hervues, was the son of the bard Hyvarnion, and was born blind. Raised by his uncles because his mother was a hermitess, he was taken to Brittany. There he built an abbey at Lanhourneau, and he was venerated as a miracle worker and bard. He is invoked against eye trouble, and he is depicted with a wolf. Tales and legends associated Herve with a wolf.