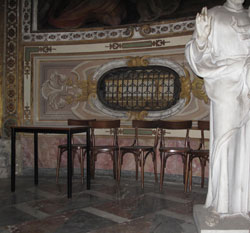 Bishop of Milan, Italy, probably from 530, exiled by the Arian Ostrogoths. When Milan was attacked by the Goths, General Belisarius of Constantinople, failed to aid the city. It is believed that Datius was taken prisoner for a time but was freed by his friend Cassiodorus. He went to Constantinople to support Pope Vigilius against Emperor Justinian in the Three Chapter Controversy of 545 . He probably died there.