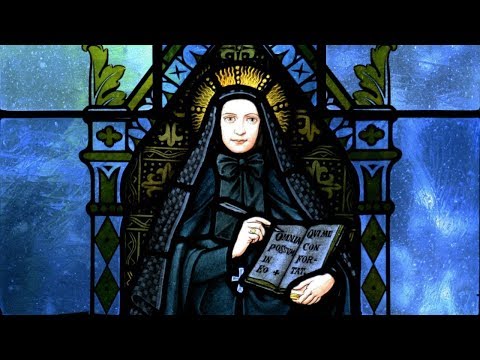 St. Frances Xavier Cabrini was born as Maria Francesca Cabrini on July 15, 1850 in Sant' Angelo Lodigiano, Lombardy, Italy. She was born two months premature and the youngest of thirteen children. Unfortunately, only three of her siblings survived past adolescence and Frances would live most of her life in a fragile and delicate state of health.

Frances became dedicated to living a life for religious work from a young age and received a convent education at a school ran by the Daughters of the Sacred Heart. She graduated with high honors and a teaching certificate.

When Frances was 18, she applied for admission to the religious congregation of the Daughters of the Sacred Heart, but was turned down because of her poor health. Instead, a priest asked her to teach at the House of Providence Orphanage in Cadagono, Italy. She taught at the girls' school for six years and drew a community of women in to live the religious way of life.

In 1877, she became Mother Cabrini after she finally made her vows and took the religious habit, also adding Xavier to her name in honor of St. Francis Xavier.

When the House of Providence Orphanage closed, her bishop asked her, along with six other women from her orphanage in Cadagono, to found the Missionary Sisters of the Sacred Heart to care for the poor children in both schools and hospitals. Frances composed the Rule and Constitution for the religious institute.

In its first five years, the institute established seven homes and a free school and nursery. Frances wanted to continue her mission in China, but Pope Leo XIII urged her to go to the United States, a nation that was becoming flooded with Italian immigrants who needed her help. "Not to the East, but the West," was his advice to her.

On March 31, 1889, Frances arrived in New York City along with six other sisters ready to begin her new journey. However, right from the beginning she encountered many disappointments and hardships. The house originally attended for her new orphanage was no longer available, but Frances did not gve up, even though the archbishop insisted she return to Italy.

After she refused, Archbishop Michael Corrigan found them housing with the convent of the Sisters of Charity. Frances then received permission to found an orphanage in what is now West Park, New York and now known as Saint Cabrini Home.

Filled with a deep trust in God and endowed with a wonderful administrative ability, Frances founded 67 institutions, including orphanages, schools, and hospitals, within 35 years dedicated to caring for the poor, uneducated, sick, abandoned, and especially for the Italian immigrants. Her institutions were spread out in places all over the United States, including New York, Colorado, and Illinois.

Frances was known for being as resourceful as she was prayerful. She was always able to find people to donate their money, time, and support for her institutions.

In 1909, Frances became a naturalized citizen of the United States.

Eight years later, on December 22, 1917, Frances passed at the age of 67, due to complications from dysentery at the Columbus Hospital, one of her own hospitals, in Chicago, Illinois.

Frances' body was originally placed at the Saint Cabrini Home, but was exhumed in 1931 as part of her canonization process. Her head is preserved in Rome at the chapel of the congregation's international motherhouse. One of her arms is at the national shrine in Chicago, and the rest of her body rests at a shrine in New York.

Frances has two miracles attributed to her. She restored sight to a child who was believed to have been blinded by excess silver nitrate, and she healed a terminally ill member of her congregation.