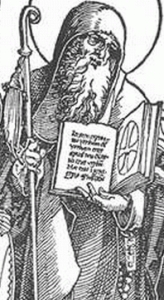 Monk, hermit, and founder. He labored to evangelize the region of Noricum (part of. modem Austria), establishing a number of monasteries along the Danube River near modern Vienna. In his last years, he gave aid and comfort to the many refugees and victims of the invasion of the region by Attila and the Huns. He was known for his preaching and prophecies, Severinus died on January 5. His relics were later carried to Naples. Italy, and enshrined in the Benedictine monastery of San Severino.