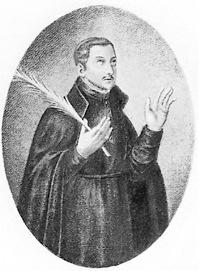 English Jesuit martyr. A nephew of the Jesuit Henry Garnet, he was born in Southwark, England, and studied for the priesthood at St. Omer, France, and Valladolid, Spain. Initially ordained as a secular priest, hejoined the Jesuits in 1604 and worked to advance the Catholic cause in Warwick until his arrest in 1606. He was exiled after months of torture but returned in 1607 and was soon arrested. He was hanged at Tyburn. Beatified in 1929, he was canonized in 1970 and is included among the Forty Martyrs of England and Wales.