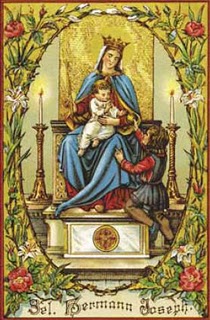 German Praemonstratensian and mystic. Born in Cologne, he demonstrated at an early age a tendency toward mystical experiences, episodes which made him well known and deeply respected through much of Germany. He subsequently entered the Praemonstratensians at Steinfeld, Germany, where he was ordained. Herman experienced visions of Jesus, Mary, and Joseph, and authored a number of mystical writings. Long considered a saint, he was given an equivalent canonization by Pope Pius XII in 1958.