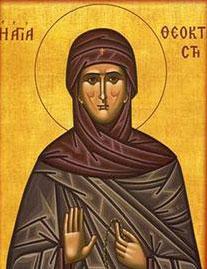 Nun and hermitess. According to tradition, she lived on the island of Lesbos in the Aegean Sea before being kidnapped by Arab raiders. They took her to the island of Paros where she escaped and lived thereafter for thirty years as a herrmitess. Discovered one day by a hunter named Simon, she begged him to return when he could with Holy Communion, a plea he fulfilled a year later after which she soon died. It is thought by scholars that the tale of the Holy Communion was based on the similar event in the life of St. Mary of Egypt.