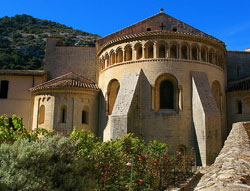 Knight and Benedictine monk, the son of Count Thierry of Toulouse. William was a member of the famed court of Charlemagne (r. 768-814). He was named duke of Aquitaine and chosen to lead a campaign against the Saracens in southern France. He defeated the Islamic Saracens in this campaign. Throughout his military career, he displayed exemplary chivalry and was honored as the ideal knight. However, he gave up the sword and became dedicated to the promotion of the faith. William founded a monastery at Gellone, near Aniane, and with Charlemagne's permission, entered the cornmunity as a monk. The abbey was later renamed SaintGuilhem-du-Desert in his honor. William was also the subject of several medieval romances, including La Prised Orange and Aliseans. He was canonized in 1066.