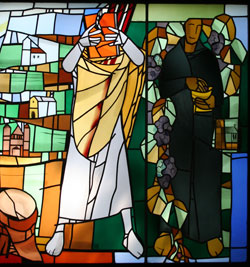 Abbot and missionary. Originally an English monk, he traveled to Germany, where he accepted the invitation of St. Boniface, who wanted his help in the missionary field and who named him abbot of Fritzlar, near Cassel, France. After a number of years, he was transferred to Ohrdruf, in Thuringia, Germany, but Boniface gave him permission to return to Fritzlar, where he died. Feast day: August 13.