Feastday: May 2
Patron: of libraries, librarians (in Switzerland and Germany)
Death: 926 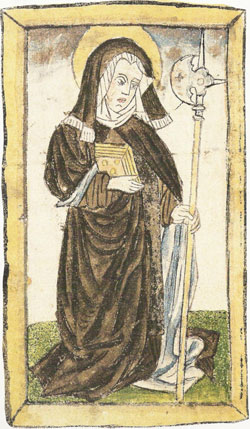 Martyred nun, also listed as Guiborat and Weibrath. Born at Klingna, Aargau, Switzerland, she belonged to the Swabian nobility. When her brother Hatto entered the Benedictines at St. Gall, she went with him and worked as a bookbinder and lived for a time as a recluse. She desired to exist as a hermit and to be walled up as an anchoress. Before the monastic leaders of St. Gall would acquiesce, she was forced to endure an ordeal by fire, successfully convincing her vocal critics. Her cell was visited by many who sought out her wisdom. She was also noted for her austerities, holiness, and her gifts of prophecy One of her visions told of her own martyrdom, which came to pass when invading Magyars of Hungary murdered her in her cell.