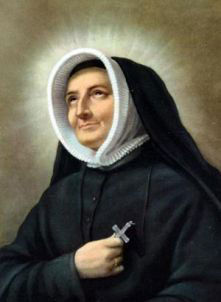 Born at Joigny, Burgundy, France, on December 12, the daughter of a cooper, she was educated by her older brother Louis, who later became a priest and who imposed the strictest discipline and penances on her. On his recommendation, Father Varin, who planned to form an institute of women to teach girls, a female counterpart of the Jesuits, received her and three companions into the religious life in 1800, thus founding the Society of the Sacred Heart of Jesus. They founded their first convent and school at Amiens the following year, and in 1802, Madeleine, though the youngest member of the group, now grown to twenty-three, was appointed Superior; she was to rule for sixty-three years. The Society spread throughout France, absorbed a community of Visitation nuns at Grenoblein in 1804 (among whom was Blessed Phillipine Duchesne, who was to bring the Society to the United States in 1818), and received formal approval from Pope Leo XII in 1826. In 1830 the Society's novitiate at Poitiers was closed by the Revolution, and Madeleine founded a new novitiate in Switzerland. By the time of her death in Paris on May 21, she had opened more than 100 houses and schools in twelve countries. She was canonized in 1925. Her feast day is May 25th.