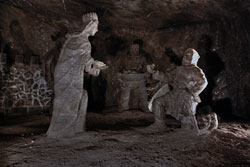 St. Kunegunda (1224-1292) Daughter of King Bela IV and niece of St. Elizabeth of Hungary, she married King Boleslaus V of Poland at sixteen. On his death in 1279 she became a Poore Clare at the Convent of Sandeck, which she had founded. She also built churches and hospitals, ransomed Christians captured by the Turks, and served the poor and ill. She is also known as St. Kinga. Her cult was confirmed in 1690. Feast day July 24.