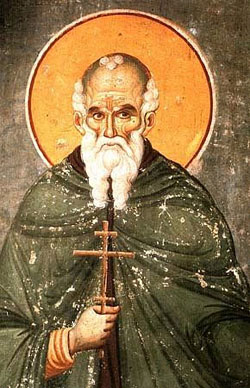 Abbot and founder. He was born in Trebizond, Turkey, and studied at Constantinople. There he became a monk, going to St. Michael's Monastery in Kymina, Bithynia to join a laura. To avoid being named abbot of St. Michael's, Athanasius went to Mount Athos in Greece, where he aided Nicephoras Phocas, a longtime friend, in repelling the Saracens who were invading the region. Successful in this military campaign, Athanasius received financial backing from his friend to found a monastery on Mount Athos in 961. When Phocas became emperor, Athanasius went to Cyprus to avoid being called to court, but Phocas sent word to him that he should return to his monastery In establishing the laura system, Athanasius made enemies of the monks already on the mount. Only imperial protection kept him safe from assassination at tempts. In time, he served as abbot of fifty-eight communities of monks and hermits on Mount Athos. He and five monks were killed when the arch of a church collapsed.