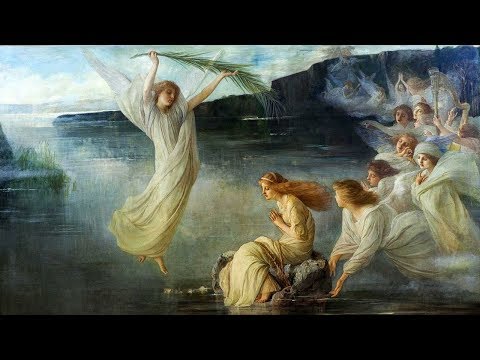 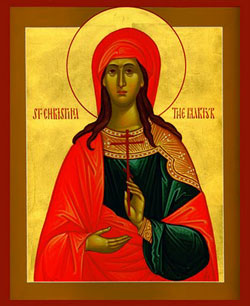 Few details are known of St. Christina but she lived during the third century and was the daughter of a rich and powerful magistrate believed to have been named Urbain. He was deep in the practices of heathenism and had a number of golden idols, which he distributed among the poor.

Though his lovely daughter had drawn the eye of several suitors by the time she reached the age of 11-years-old, Urbain wanted her to be a pagan priestess.

He locked his daughter in a room filled with gold and silver idols, then ordered her to burn incense before them.

Saint Christina often peered at the world outside her window and decided there must have been a great creator of the world. Turning to the idols, she came to believe they could only be false as they were forged by man.

She began to pray to the creator of the world and asked him to reveal himself to her. That was when she felt an intense love blaze from deep within her heart. She began to fast and continued to pray.

An angel came to St. Christina and taught her the Gospel of Christ. It then called her a bride of Christ but warned she would suffer for her faith.

Knowing the Truth, St. Christina smashed the false idols and threw them through the window. When her father came to visit and discovered the missing idols, he questioned St. Christina but she refused to speak to him.

After sending the servants in to speak to her, Urbain learned of her new faith. Enraged, he began to slap his daughter's face until she began to speak - but her words were to proclaim her new faith and to share the Truth. She also admitted to destroying the idols.

Urbain executed the servants who tended St. Christina and beat her before throwing her in prison. St. Christina's mother came to the prison and pleaded for her daughter to renounce her faith but St. Christina refused.

The next day, Urbain took St. Christina to trial and ordered her to worship the pagan gods and beg for forgiveness.

Rather than following her father's orders, St. Christina held fast to her Christian faith and was ordered to be tortured.

She was tied to an iron wheel above an extreme fire. As she was raked through the flames, her body was burned but she did not die. She was thrown into a prison cell and that night an angel appeared. Her wounds were healed and she was fed food the angel brought with it.

The next day, when her father found her unharmed, he ordered a stone to be tied around her neck and she was thrown into a lake. As she sank, an angel sustained then untied her. When she reappeared above the water, Urbain attributed her survival to sorcery.

He decided to execute her the following morning but that night he died suddenly.

The region's governor was sent to execute St. Christina's punishment in her father's stead but she survived every torture. When fellow believers discovered the miracles, they began to gather at her cell.

During her time in captivity, she converted nearly 300 people until a new governor arrived and resumed her torture. When she survived five days in a red-hot furnace, she was finally executed with a sword.

O Venerable Christina,
You appeared as a shining dove,
With a pair of golden wings
Alighting in the Highest Heavens.
Therefore we celebrate your glorious feast
And bow before the place that holds your relics.
Pray that we may receive grace and healing for body and soul.