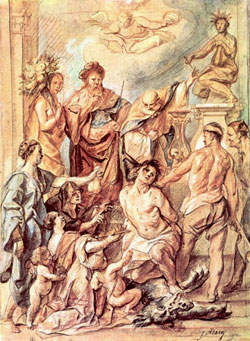 Quentin was also known as Quintinus. According to legend, he was a Roman, went to Gaul as a missionary with St. Lucian of Beauvais, and settled at Amiens in Picardy. He was so successful in preaching that he was imprisoned by prefect Rictiovarus, tortured, and then brought to Augusta Veromanduorum (Saint-Quentin), where he was again tortured and then was beheaded. His feast day is October 31st.