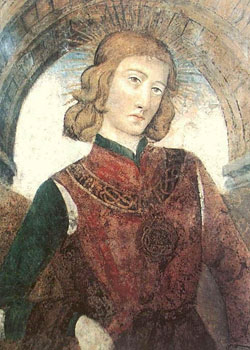 Duke of Savoy, a model of charity. Amadeus was the son of Duke Louis I of Savoy. He was born in 1435 in Thonon, Savoy and betrothed as an infant to Princess Yolanda, the daughter of Charles VII of France. They were married in 1451, and Amadeus succeeded his father as duke of Savoy. A victim of epilepsy, he resigned his dukedom around 1471, leaving Yolanda in control. A revolt developed, and Amadeus was imprisoned until King Louis XI of France, Yolanda's brother, secured his release. He died on March 30, 1472, known for his charity and concern for the poor. He was beatified in 1677.