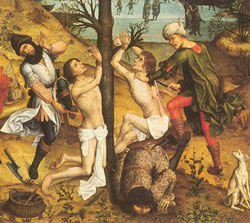 Unreliable legend had Crispin and Crispinian, noble Roman brothers who with St. Quintinus, went to Gaul to preach the gospel and settled at Soissons. They were most successful in convert work during the day and worked as shoemakers at night. By order of Emperor Maximian, who was visiting in Gaul, they were haled before Rictiovarus (whose position is unknown and even his existence is doubted by scholars), a hater of Christians, who subjected them to torture; when unsuccessful in trying to kill them, he committed suicide whereupon Maximian had the two brothers beheaded. They are the patrons of shoemakers, cobblers, and leatherworkers. Their feast day is October 25th.