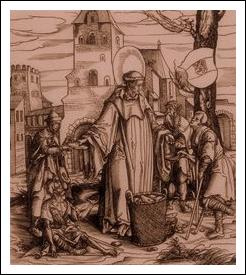 Patron of French churches and towns. A nephew of Charles Martel, he was raised as a nobleman at the court of his cousin Charlemagne. At age twenty Adalard entered the monastery of Cordie in Picardy, but then went to Monte Cassino, staying there in seclusion until Charlemagne insisted he return to court. At Corbie, Adalard was elected abbot and then named Prime Minister to Pepin, Charlemagne's son, the King of Italy. He became involved in the political struggles of the royal family and in 814 he was banished to Hermoutier. After seven years of exile, Adalard was cleared of all charges and returned to the court of Louis the Pious. Adelard died on January 2, 827