Would you accept the MARK OF THE BEAST to get a job?

In the last days, the people will be given the Mark of the Beast, and none will be able to buy or sell without it. Alarmingly, the mark has arrived and people are accepting it without considering the ramifications of such a choice. 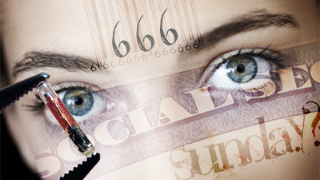 Are RFID chips the Mark of the Beast? Some Christians think so. Others thing bar codes, cell phones, Sunday worship, and social security cards are it. They're guessing, sometimes absurdly. We may not know until it is almost too late.

LOS ANGELES, CA (California Network) -- Workers at a Swedish startup are being invited to parties. At these parties, some members of the firm choose to have an RFID chip implanted into their hands, between their thumbs and forefinger.

The firm is called Epicenter, and employees are receiving the chip on a voluntary basis. The chips allow them to unlock doors, operate machines and buy products. It's a convenience and it's secure because unlike a key or a card, it cannot be lost or stolen. The injections are painless and bloodless.

The technology has been around for some time, but it has traditionally been used for pets. Its use in humans has been rare. However, the chips are cheap and easy to inject and their use is on the rise.

Some fear that these chips are the Mark of the Beast foretold in the book of Revelation.

[16]And he causeth all, both small and great, rich and poor, free and bond, to receive a mark in their right hand, or in their foreheads: [17]And that no man might buy or sell, save he that had the mark, or the name of the beast, or the number of his name. [18]Here is wisdom. Let him that hath understanding count the number of the beast: for it is the number of a man; and his number is Six hundred threescore and six. (Revelation 13:16-18)

Nobody can say conclusively what is, or is not the Mark of the Beast. The mark appears to be described as a tattoo, not an implant. And the mark is essential to commerce. Variously, people have speculated that the mark is the cellphone, the credit card, and more recently, the RFID chip.

The problem with these items, and the RFID chip in particular, is that it can contain all sorts of data. It can be used to register, classify, and track people. The chip could be switched off, or its use restricted. Once everyone is chipped, people who fall out of favor with their government could be banned from buying or selling. Criminals could be stopped from spending money and located if they come in range of a reading device. But innocent people could also be persecuted.

Imagine a society where such chips were required for all. Imagine Christians have fallen out of favor, and now they cannot buy food. Imagine if Christians were considered outlaws and fugitives. Once people can be easily marked, they can be managed. Unlike an identification card, or a style of dress, an RFID chip cannot be disguised. You cannot refuse to show it. What little anonymity we still have in today's world is lost.

Of course, criminals and other enterprising souls will develop measures to cope with these changes, but most people are not going to have their chips hacked or new ones implanted.

For young people, who have grown up in the age of cellphones and a lack of privacy, the chips will be seen as a convenience. But for those of us who understand, the chips remain a source of suspicion and concern. And no God-fearing person intends to flirt with the Mark of the Beast.

Are these chips the mark foretold in Revelation? It is difficult to say, but expect the prudent to err on the side of caution.

We know not the day or hour.