The 2018 Olympic Games have opened in Pyeongchang, South Korea. The opening ceremonies saw the North and South Korean teams enter the stadium under a unified banner, but Vice President Mike Pence remained seated, fueling speculation that the USA has no intention of reducing pressure on North Korea, despite its recent peaceful overtures. 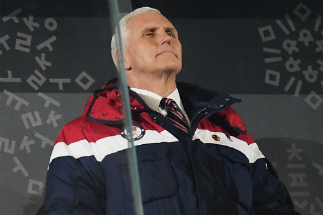 Vice President Mike Pence refused to stand at the entrance of the unified Korean team. Does this portend difficult times ahead?

LOS ANGELES, CA (California Network) - The 2018 Olympic Games in Pyeongchang, South Korea have begun. The games opened with a nighttime ceremony in freezing, 26-degree weather. Despite the cold, the stadium was packed with 30,000 people from around the world. Included were Vice President Mike Pence, who sat just one row away from the North Korea delegation which included Kim Jong Un's sister.

Korean athletes from both North and South entered the stadium under a unified flag. The flag was white, the color of peace, with a sky-blue silhouette of the Korean peninsula. As the team entered the stadium, dignitaries arose out of respect, except for VP Mike Pence and his wife, Karen, who remained seated.

A message is being sent to North Korea. While millions criticize the Trump administration for planning a military parade and refusing to stand for the Korean athletes, President Trump is working to avoid a nuclear war with North Korea. This is the reason behind several of Trump's widely criticized decisions. The problem is that most Americans are unaware of the seriousness of the nuclear crisis.

A careful assessment of all the facts, including statements made by the intelligence community and Congress, suggest that North Korea is close to having a working, long-range, nuclear-capable missile. The North's recent peace overtures are a play for time, not a genuine effort to improve relations. The North's military parade held just hours before the opening ceremonies underscores that the regime is not seeking a lasting peace, despite their public statements.

Experts believe North Korea seeks an eventual reunification of Korea, by force. To accomplish this requires splitting up the alliance between the USA and South Korea. This has become easy thanks to the South's appeasement strategy.

North Korea may believe that taking control of the South will ensure the stability and well being of the regime over the long-term.

However, the United States cannot permit a nation under a hostile dictator to hold long-range nuclear weapons. Such a development would erode U.S. power in the Pacific and could upset the three-way detente between China, Russia, and the USA.

The political posturing may run counter to the spirit of the Olympics, which is supposed to be about peaceful competition. However, the Olympics have also provided an outlet for cold war tensions.

As evidenced by VP Pence's act of protest, it seems unlikely that the tensions between the USA and North Korea will be eased by the games.