Don Bosco's Nova A Man Of Many Adjectives

Desire, tough, and winner. Those are the three words that Don Bosco Prep quarterback Gary Nova believes best describe him. Based on his junior football season last year, it's hard to dispute them. 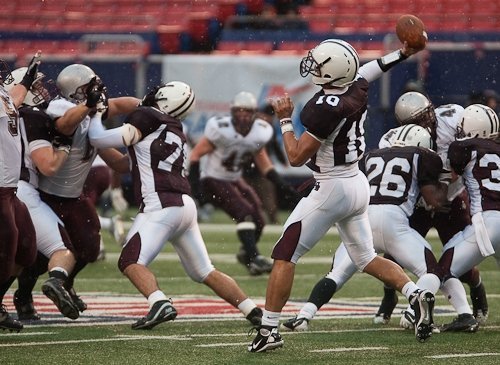 LOS ANGELES, CA (CatholicSportsNet) - Showing the desire to succeed and the toughness to persevere, Nova worked diligently to earn his position as starting QB prior to last season's kickoff; and once he did, the "winner" part fell into place. Leading the charge, Nova and his Ironmen teammates finished the 2009 season with a 12-0 record, a New Jersey football state championship, and the ultimate prize - an outright national championship.

Nova, who was named the best Catholic high school quarterback in the country by nearly 5,000 CatholicSportsNet.com voters, could easily add three more words to his list if wanted: leader, confident, and grateful.

"I think my best attribute as a quarterback is that I am a driven leader, always someone my teammates can lean on," said Nova. "(As far as football), I think my strengths are that I can stretch the field with the deep ball and win games. I can definitely always improve on my drops and my knowledge of the game as well."

Heading into the start of this season, Bosco boasts a 23-game winning streak and the hope of repeat championships floating in the back of their minds. But if 2010 is anything like last season, Nova says that thoughts of going back-to-back won't be anywhere near the forefront.

"The success we had last year as a team at Don Bosco Prep is really a testament to all the hardwork we put in the offseason," said Nova. "We never really focused on winning a national championship or state championship, we just took it one game at a time and knew that if we our job, those things could be accomplished. My job as the quarterback was to do my job to best of my ability, and be a leader."

Fortunately, the pressure and stress of the recruiting grind will not be a factor for Nova this season, as the Ironman quarterback kept the "D-I streak" alive at Bosco and has already made his commitment to play college football at the University of Pittsbugh.

As for wrapping up his high school career, Nova is grateful for his opportunity to have received a Catholic education.

"I've been going to Catholic school my whole life and it has made a huge impact on my life. I have matured much faster," said Nova. "Don Bosco is an all boys private school, so the drama of girls is not there. You're just surrounded by a bunch of people who want to be successful just like you."

Nova, who says his life hero is his father, also admires one of the best quarterbacks in the NFL - Peyton Manning. Last season, Nova finished with "Peyton-like" numbers, as he completed 94 of 159 passing attempts for 1,668 yards, 23 touchdowns, and a mere three interceptions.

"Even though (Manning) is the best quarterback in the NFL, he still works harder then anyone in the league," said Nova. "He performs at such a high level every game because he is much more prepared."

It's a safe bet that Nova has done his homework and will be equally prepared for his final act this season. And if that's the case, and another state and/or national championship is capture, a seventh word can be added to Nova's list: legend.

Croatia vs. France: How do the World Cup teams line up in the Catholic Church?

On Sunday, France and Croatia will square off on the soccer pitch for the 2018 FIFA World Cup Championship. While most U.S. Catholics are ... continue reading

The 2018 Olympic Games open with one ominous sign Watch

The 2018 Olympic Games have opened in Pyeongchang, South Korea. The opening ceremonies saw the North and South Korean teams enter the ... continue reading

Is it acceptable for a Catholic to enjoy watching the Super Bowl? Watch

Super Bowl Sunday. It's as American as apple pie, but in recent years, controversy has erupted over the beloved American pastime and - ... continue reading

Black magic? Have you heard about the curse broken by the Chicago Cubs? Watch

The Chicago Cubs have won the 2016 World Series in a 10-inning game, beating the Cleveland Indians 4-3. The win breaks a 108-year losing ... continue reading

The world lost a great human being and legendary sportsman in Arnold Palmer. The golfer passed away on September 25, a day before he was to ... continue reading