How did the California Missions support themselves?

The California Missions were 21 churches established by the Franciscan order in what was called "Alta California" between 1769 and 1833. Their purpose was to evangelize the Indigenous people and serve as outposts at the distant edge of the Spanish Empire. However, so far from Spain, these missions had to be self-sufficient. How did they do it? 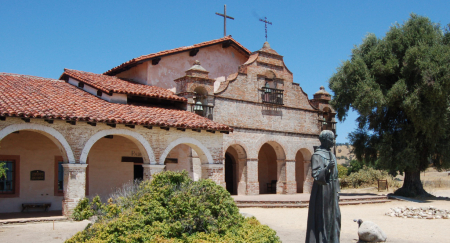 How did the missions support themselves?

LOS ANGELES, CA (California Network) - The California missions were established by the Franciscan order with the purpose of evangelizing the Indigenous people of Alta California. Today, the region is part of the United States and is the modern-day state of California.

For the friars, there was an obvious problem with the effort. Alta California was months away from Spain in terms of travel, and there was no practical way to supply and sustain the missions from Spain. Even supplying the missions from Mexico would be a challenge in an age before modern transportation networks. The beautiful, natural harbors that are San Francisco and San Diego Bays were two gems along a coastline punctuated with high, rugged cliffs. Those cliffs along most of the shore made supply by sea rather inconvenient.

The missions were carefully planned, so as to be about one day's travel from each other. In that way, a traveler following El Camino Real (The King's Road) would always have a safe place to sleep at night. And over the course of a few weeks, they could travel much of Alta-California's coast in safety.

But getting from Alta California to Mexico City, or Spain was itself an ordeal. Although the friars would have some support from the Church and the crown, it would be minimal.

Each mission was granted a "dowry" of 18 cattle, four pigs, and an assortment of horses, sheep, goats, and mules. Not all of these animals would survive the journey, and some would not survive long after arrival. However, if just a breeding pair survived, they could produce enough offspring to sustain the friars with enough meat, hides, and other materials needed to survive.

Upon arrival, the friars began their work of evangelizing the Indigenous people. Spanish and Church law forbade forcing people to accept Christianity, so the friars enticed them with promises of food and safety. For many indigenous persons, this was good incentive. Many of the Indigenous people of California survived by hunting and gathering, and this did not always provide enough food to sustain people in difficult, drought-prone years. Local conflicts and infighting also made life difficult for some Indigenous people. The missions offered a degree of safety and security.

Once a person joined the mission, they were essentially enlisted as serfs in the European tradition. The people were not permitted to leave the land without permission and were instead required to perform work. The work was typically unpaid. However, this should not be misconstrued as chattel slavery, which was already in practice in the American colonies and elsewhere in the world. In exchange for their residence and labor, people were evangelized, educated, and their needs were sustained. People made the clothing they needed, grew their own food, and were otherwise at liberty to live as they pleased, consistent with Christian principles. The existence was comfortable and easy enough to attract increasing numbers of people to the missions until they become established the first towns and cities in California. At first, the Indigenous people, and soon after, settlers from afar.

Each mission was an engineering marvel. The mission churches were built with walls that surrounded a central courtyard. This afforded the friars and their followers some protection, although it would be a stretch to call the missions "forts."

The missions were exquisitely decorated with the Indigenous workers providing both labor and artwork. Their intricate paintings and other work remain a marvel of art and engineering to this day. Nearly all of the missions are still both active parish churches and major tourist attractions for this reason.

Around the missions, complex but effective engineering projects were undertaken including the creation of the region's first aqueducts to transport water to the mission communities. Mills to process grain and other crops were constructed.

However, the main industry of each mission was ranching. The rolling hills created by the collision of two vast tectonic plates were perfect for ranching, allowing the herds of cattle, horses, sheep, and goats to explode in population. At their height in the early 1830s, the missions were home to almost 300,000 head of cattle, 321,000 hogs, and 62,000 horses.

The animals provided food for everyone while their hides were loaded onto ships and sold in distant markets. This fact is recorded in the book, Two Years Before the Mast by Richard Henry Dana, who would later become a U.S. Senator. In his book he mentions how hides were cast from the clifftops onto be beach below to be gathered by sailors and rowed to their ships. Income from these hides allowed the friars to sustain their missions, purchasing the tools, equipment, books, and other items they could not produce locally.

In short, the missions were supported by ranching.

Today, this legacy continues with Montana Ranch and Cattle, which is a mission of Your Catholic Voice Foundation. The profits of the ranch are used to support Catholic Online School and its mission to provide a free world-class Catholic education for anyone, anywhere.

You can check out Montana Ranch and Cattle here.