St. Peter's birthplace excavated in Israel, where a mosaic affirms his primacy.

A mosaic confirms two important teachings of the Church about St. Peter the Apostle.

St. Peter was the first pope of the Church.

LOS ANGELES, (Catholic Online) - An ancient mosaic confirms what the Church has long taught about St. Peter the Apostle. He was born in Bethesda, now called el-Araj in northern Israel, and he was the first pope.

The mosaic is about 1,500 years old and marks the location of a church built at his birthplace. The mosaic features a prayer of intercession calling upon St. Peter as "the chief and commander of the heavenly apostles." 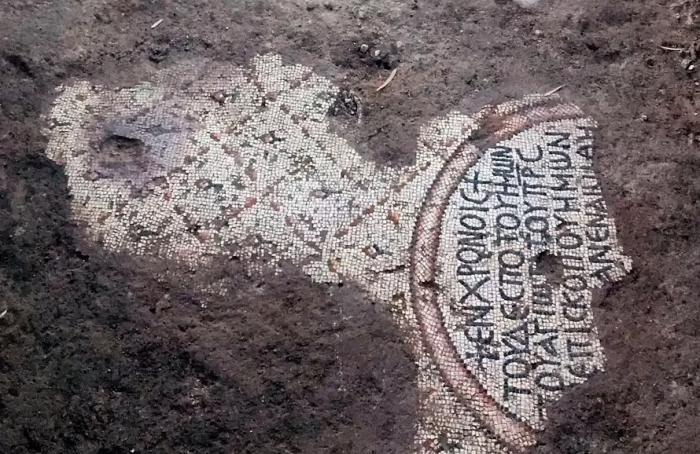 The mosaic that declares Peter 'Chief and Commander of the heavenly Apostles.'

The Bible mentions that St. Peter came from both Bethesda and Capernaum. The understanding is that he was born in Bethesda and lived in Capernaum when he encountered Jesus. The discovery of the church and mosaic now confirms this.

After the death of Christ, the first Christians established shrines at locations associated with Jesus and the Apostles. When Christianity was legalized in the Roman Empire, churches were built on those locations. This is what happened in ancient Bethesda where the church and mosaic were found.

A reference to the church was made by Saint Willibald, an 8th century bishop. He visited the area in 725 AD and mentioned in his writings that a church had been built at the site of Sts. Peter and Andrew's birthplace.

A monastery was also located at the site, another typical feature of ancient churches built upon important shrines.

The church was collapsed by an earthquake in 749 AD, and was not rebuilt. It was thereafter lost to time until its discovery and excavation.

Saint Peter is an important biblical and historical figure. Although he did not compose a Gospel, he did write letters and was clearly active as leader of the apostles, following the death of Christ.

Peter was appointed to this position by Jesus himself. The moment is documented in Matthew 16. There are multiple biblical references to St. Peter as being the head of the Church and Church tradition has always upheld this truth.

Now, further proof is evident in the primary sources of antiquity.