The Assumption of Mary

How the Virgin Mary points the way along the path Christians are destined to follow.

Why is the Assumption important? First, lets look at what this dogma is all about. On 1 November, 1950, Pope Pius XII issued the Apostolic Constitution Munificentissimus Deus in which he proclaimed the dogma of the Assumption: "Mary, the immaculate perpetually Virgin Mother of God, after the completion of her earthly life, was assumed body and soul into the glory of heaven." 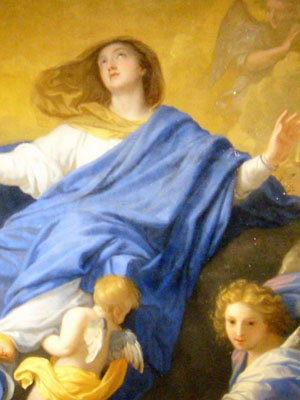 GLADE PARK, CO (Catholic Online) -- Today we celebrate the sacred Solemnity of the Assumption of the Blessed Virgin Mary. Although our separated Protestant brethren are unfortunately often hesitant to venerate the sweet Virgin Mother of Christ as a result of the persistent attitudes of 16th century revolutionaries who held to a strict and unbiblical "Bible alone" construct, one which jettisoned the Tradition of the Church and the beliefs of early Christians, setting aside the beautiful and singularly unique role of Mary, Catholics around the world celebrate with joy this wondrous day, since we owe it to Mary's virtues of faith, hope and love, along with her unwavering fidelity to God the Father, that redemption was won and salvation was made available to humankind.

Mary's role in the work of salvation is unique, unrepeatable, and essential: in virtue of her "yes" to the angel Gabriel (see Lk 1:26 ff.), as first in the order of grace, Christ was conceived by the power of the Holy Spirit in her womb. At that very instant is found the first moment of the redemption of humankind, for the Son of God had assumed an individual human nature to himself within her precious, holy womb; God and man were united, and thus men were raised to the heavenly realm. In virtue of Mary's "yes" to the salvific plan of God, Christ was born into the world and a wondrous unity of God and man became a reality. History would never be the same.

We indeed owe a great deal to the Virgin Mary. The Church Fathers often spoke of how the knot of Eve's disobedience was loosed, untied by Mary's perfect obedience; consequently, Mary has long been venerated as the New Eve. In contrast to the old Eve's collaboration with the devil, which brought sin and death into the world, God put enmity between Mary and the devil, between the New Eve and her seed, Jesus Christ (cf. Gn 3:15). While the old Eve said "no" to free and loving obedience to God, the New Eve said "yes" to God's plan in its totality, and thus brought redemption, salvation and restoration into the world in bearing her incarnate Son, Jesus Christ. What wonders! What beauty, O God, you have bestowed upon us lowly creatures in giving us so great a mother as sweet Mary!

But why is the Assumption important? First, lets look at what this dogma is all about. On 1 November, 1950, Pope Pius XII issued the Apostolic Constitution Munificentissimus Deus in which he proclaimed the dogma of the Assumption: "Mary, the immaculate perpetually Virgin Mother of God, after the completion of her earthly life, was assumed body and soul into the glory of heaven." The Catechism of the Catholic Church explains:

Finally the Immaculate Virgin, preserved free from all stain of original sin, when the course of her earthly life was finished, was taken up body and soul into heavenly glory, and exalted by the Lord as Queen over all things, so that she might be the more fully conformed to her Son, the Lord of lords and conqueror of sin and death" (LG 59). The Assumption of the Blessed Virgin is a singular participation in her Son's Resurrection and an anticipation of the resurrection of other Christians. (CCC 966)
It is important to note that Pius XII was not inventing new belief; on the contrary, he was defining what already existed as an element of the life consciousness of the Church, as a matter of the Christian faith. To follow are two examples that show the Assumption is indeed a longstanding part of the content of the divine faith of the Church:

St. Gregory of Tours wrote of the Assumption in about 590 A.D.: "The course of this life having been completed by the Blessed Mary, . . . [The Lord] commanded that [her holy body] be taken in a cloud into paradise."

St. John Damascene wrote in the eighth century: The Word of God "was pleased even after [Mary's] departure from life to honor her immaculate and undefiled body with incorruption and with translation [Assumption] prior to the common and universal resurrection."

Again, why is the Assumption of Mary into heaven important? The obvious reason is that it is important because it is reality--it is true. It is something that really happened. We know this is the case with absolute certainty because God himself, who is perfect Truth, has revealed it to be so, and the Church has definitively affirmed it as a matter of divine revelation, as a component of the divine faith. Consequently, the Assumption of Mary is a dogma of the faith based on the word of God and the content of the Church's Sacred Tradition, and thus is a divinely disclosed teaching that every Christian is bound to believe and accept as a true element of the belief of the Church of Jesus Christ. For the baptized Catholic, willful and intentional rejection of this dogma is a heresy.

There are other reasons why the dogma of the Assumption is important, one such being that the Church, as well as all other Christians who die in the friendship of God, are destined to follow Mary's path of assumption into the heavenly realm. Everyone who dies in God's grace is predestined to assumption into eternal communion with the Tripersonal God. The divine plan for men is unending, glorious union with God in the Beatific Vision! It is sweet and holy Mary who, as she led the way in bringing Christ into the world, so too leads the way as Christians are brought to their final end in God.

The "Assumption of the Blessed Virgin is a singular participation in her Son's Resurrection and an anticipation of the resurrection of other Christians" (CCC 966). "In giving birth you kept your virginity; in your Dormition you did not leave the world, O Mother of God, but were joined to the source of Life. You conceived the living God and, by your prayers, will deliver our souls from death" (Byzantine Liturgy, Feast of the Dormition).

The Assumption of Mary anticipates the general resurrection from the dead at the end of time; that sublime day on which Christ will return in glory and raise the just to the resurrection of life. At that moment in our future, we will follow Mary in a most perfect way.
-----

Deacon Frederick Bartels serves the Diocese of Pueblo, Colorado, as a member of the Catholic Clergy. He is a Catholic writer, educator and speaker who knows his Catholic Faith is one of the greatest gifts a man could ever receive. He is a contributing writer for Catholic Online. Visit him also at joyintruth.com, and Facebook. Watch for his videos on Youtube and his podcasts available on iTunes and Google Play. Access them by searching "Joy In Truth."