Pope Francis will beatify two martyrs during visit to Colombia

During his six-day visit to Colombia in September, Pope Francis will beatify martyrs Bishop Jesus Emilio Jaramillo Monsalve and Fr. Pedro Maria Ramirez Ramos, who provide a potent testimony as the country heals from decades of conflict. 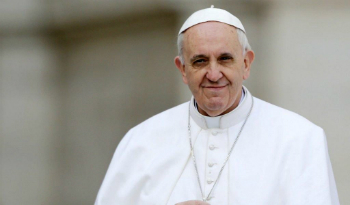 Pope Francis will beatify two martyrs when he visits Colombia.

Rome, Italy (CNA/EWTN News).- Bishop Jaramillo was killed by Colombian Marxist guerrillas forces in 1989, while Fr. Ramirez was murdered at the start of the Colombian Civil War in 1948.

The two were recognized as martyrs by the Vatican earlier this year, and will be beatified during the Pope's Sept. 6-12 visit to Colombia, which he is making largely to encourage efforts for peace and reconciliation after more than 50 years of violent conflict that has left some 200,000 people dead.

Given the nature of their deaths, the two can be seen as belonging to a new wave of "modern martyrs" Pope Francis has often referred to, killed by oppressive regimes of their time such as Nazism, communism and brutal dictatorships.

Born in Santo Domingo, Colombia, in 1916, Bishop Jamillo was one of the many thousands of victims of the 52-year-long civil war between the government and guerrilla rebels.

After intensive seminary studies in philosophy, humanities and theology, in 1940 he was ordained a priest with the Xaverian Missionaries of Yarumal at the age of 24. Just four years later, in 1944, he received his doctorate in theology.

Immediately after his ordination Jamillo was sent to serve in the Sabanalarga municipality in the northern most tip of Colombia. Part of the Barranquilla Archdiocese, the area was known at the time to be hostile, and the people had very primitive religious knowledge.

Although the assignment only lasted four months, it cemented in the future martyr a love for both the priesthood and his vocation as a missionary.

In a letter to his rector at the time, Fr. Anibal Munoz Duque, Jamillo said "I think that now my spirit is more capable of appreciating the greatness of my missionary vocation, I feel like Christ; I feel in the depths of my being the great love for my sheep."

After finishing the assignment, Jamillo was then appointed at a professor at the Order's seminary, where he quickly became known for his clarity, spiritual depth and love for the priesthood. During this time, he also served as a spiritual director at the seminary and worked at the Women's Prison in Bogota.

He was named director of novices at the age of 30, and in the year 1950 was named Second Assistant to the Secretary General of the Order and Rector of the seminary. He was easily recognized by those around him for his smile, good humor and pastoral advice.

In 1959 Jamillo was elected Superior General of the Order, guiding them through the years of the Second Vatican Council and the many changes that ensued.

Eight years into his 10 year mandate, he asked permission to step down as Superior General, and began working for the bishops conference as and adviser to the National Council of the Laity.

Not long after, in 1970, Bl. Pope Paul VI named him Apostolic Vicar of Arauca, and he was ordained a bishop in 1971. Just 13 years later, the vicariate was elevated to a diocese, and Jamillo became the first residential bishop of the area.

He quickly gained a reputation as a selfless servant who was close to his people, and launched several pastoral projects aimed at helping the local population.

Jamillo became an outspoken critic of the violence that was being committed by the National Liberation Army (ELN) at the time, however, he was also unafraid to call out what he referred to as a climate of fear among the people that often prompted them to retaliate against the guerrillas.

It was his public criticism of violence that led to his kidnapping Oct. 2, 1989, as he was making a pastoral visit to local parishes in Fortul. According to his biography, he celebrated Mass and administered some Sacraments before setting out for the city on foot when he and his delegation were stopped by armed militants dressed as peasants.

They asked for the bishop, telling him they were members of the ELN and that he was being kidnapped in order to "send a message" to the national government. One of the priests traveling with Jamillo, Fr. Helmer Munoz, realized what was happening and refused to leave the bishop's side.

The two were driven for several hours before stopping in a remote location. After praying together and absolving each others' sins, Jamillo ordered Fr. Munoz to leave out of obedience when the captors demanded that he go. As he was walking away, Munoz heard the the bishops' last known words, when he said: "I will speak to whoever you want me to, but please, don't do anything to my son."

Despite reassurances from the captors that Bishop Jamillo would not be hurt, when Fr. Munoz returned to the spot the following morning he found the bishop's body. Jamillo was lying on his back in the form of a cross, having been shot in the head twice; his episcopal ring was gone, and his pectoral cross had been broken.

He was buried shortly after and dubbed by the faithful of Arauca as "prophet and martyr of peace," which is engraved on his tombstone.

The murder of Fr. Pedro MarĂ­a Ramirez Ramos also came at another contentious point in Colombia's history, when the country was facing divisions after the death of left-wing presidential candidate Jorge Eliecer Gaitan.

Born in La Plata, Colombia Oct. 23, 1899, Ramirez was just 12-years-old when his brother, Luis Antonio, invited him to join the seminary. He was officially enrolled in the seminary of Mayor de Garzon in 1915, but left in 1920. However, he entered the seminary again in 1928, this time in Ibague.

RamĂ­rez was ordained a priest just three years later on June 21, 1931. He then served as pastor in various cities until 1946, when he was assigned to Armero just as political conflict in the country began to intensify.

After Gaitan's death, tensions between liberals and conservatives reached a fever pitch, eventually leading to Colombia's 10-year civil war, which lasted from 1948-1958 and is commonly referred to as "La Violencia," or "the Violence." It was out of this conflict that many of the left-leaning guerrilla groups who have fought against the government for the past 50 years rose.

Amid the chaos of the war, many liberal party groups in Armero protested Gaitan's death by taking up arms, widely accusing the Church of joining forces with the conservative party; accusations they backed with the Church's alleged support for conservatives and their frequent appeals to nonviolence.

It was in this atmosphere that an angry mob, alight with anti-religious sentiments, stormed Fr. Ramirez's parish and a nearby convent April 9, 1949, in an attempt to arrest him.

They started throwing stones and eventually broke into the curial house and went to the chapel, where Fr. Ramirez was praying. He managed to escape with the help of one of the nuns.

The next morning, Ramirez continued his schedule as normal, celebrating Mass and visiting a wounded man in prison. Despite numerous pleas from parishioners and even the city's mayor to leave town, Ramirez refused, insisting that he would not leave the sisters or the Blessed Sacrament alone.

After returning from the prison, the priest created an escape plan for the sisters, and had them consume all the consecrated hosts, leaving just one for himself. He then stayed in the convent to pen his last will and testament before the mob returned.

In the letter with his testament, Ramirez wrote that "I want to die for Christ and for his faith." He thanked the bishop for allowing him to become a priest for the people of Armero, "for whom I want to spill my blood."

"To my family, I will go ahead so that they follow the example of dying for Christ. With special affection, I will look at them from heaven," he wrote.

Later that afternoon, as the mob returned, he consumed the last host and left his stole and serving vestments with a statue of Our Lady so they would not be desecrated before going out to meet the crowd.

The mob took Fr. Ramirez and beat him with sticks and their fists before bashing his head with a machete. As he fell to the ground, the priest shouted "Father, forgive them! All for Christ!" He was then decapitated, however, his body was later recovered and preserved from further desecration.

Pope Francis has often said that there are more martyrs now than in the early Church, and has praised them as sources of life and strength for the faith.

In an April 22, 2017, liturgy honoring the "new martyrs" of the Church, the Pope noted how in many communities around the world Christians are "objects of persecution." However, he also noted that it is in difficult moments that people frequently call for "heroes."

The Church today also needs the heroic witness of martyrs and saints, he said, explaining that this includes "the saints of everyday life," who move forward with coherency, but also those who "have the courage to accept the grace of being witnesses until the end, until death."

"All of them are the living blood of the Church. They are the witnesses who carry the Church forward," he said. By demonstrating with their lives that Jesus is alive and risen, they also "attest with the coherency of their lives and with the strength of the Holy Spirit that they have received this gift."