Who are you? John the Baptizer, Basil and Gregory Nazianzen Call Christian Men to Live as Friends

They knew who they were as men because they knew who Jesus is. Do we know who we are as men?

Friendship participates in the Love of God from which it derives. Greek, the original language of the New Testament, differentiates between the forms of love.English is limited in that regard. Friendship is a form of love. Those who are Baptized into Christ and choose to live their lives in Him are His Friends. (John 15:15) Friendship between men who bear the name Christian is a witness to the eternal truth of the fullness of Love . 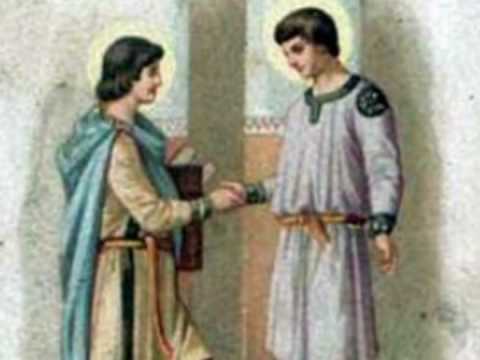 P>CHESAPEAKE, VA (Catholic Online) - I proclaimed the Gospel on the morning of January 2, 2013,  the Memorial of Saints Basil the Great and Gregory Nazianzen, Bishops, Doctors. I would hasten to add these two men were also true friends. The Gospel passage featured a familiar character from our Christmas season, John the Baptizer. Here is a portion:

"This is the testimony of John: When the Jews from Jerusalem sent priests and Levites to him to ask him, "Who are you?" He admitted and did not deny it, but admitted, "I am not the Christ." So they asked him, "What are you then? Are you Elijah?" And he said, "I am not."

In my Morning Prayer before Mass, after reflecting on the readings in preparation for Mass, I prayed the Liturgy of the Hours. The passage in the Office of Readings was an excerpt from an account by St Gregory Nazianzen in which he spoke of his friendship with Basil.

Theirs was a friendship which began as children and lasted throughout their entire lifetime. It is a testimony to the beauty of authentic, manly, Christian friendship. In an age which is relationally confused and has lost an understanding of the gift of friendship between men, it provides us with a reminder that friendship is a form of love.

Thus, as with all love, friendship participates in the Love of God from which it derives. Greek, the original language of the New Testament, differentiates between the forms of love.English is limited in that regard. Friendship is a form of love. Those who are Baptized into Christ and choose to live their lives in Him are His Friends. (John 15:15) Friendship between men who bear the name Christian is a witness to the eternal truth of the fullness of Love .

Here is a portion of this beautiful tribute to a friend: "Basil and I were both in Athens. We had come, like streams of a river, from the same source in our native land, had separated from each other in pursuit of learning, and were now united again as if by plan, for God so arranged it."

"I was not alone at that time in my regard for my friend, the great Basil. I knew his irreproachable conduct, and the maturity and wisdom of his conversation. I sought to persuade others, to whom he was less well known, to have the same regard for him."

"The same hope inspired us: the pursuit of learning. This is an ambition especially subject to envy. Yet between us there was no envy. On the contrary, we made capital out of our rivalry. Our rivalry consisted, not in seeking the first place for oneself but in yielding it to the other, for we each looked on the other's success as his own."

"Our single object and ambition was virtue, and a life of hope in the blessings that are to come; we wanted to withdraw from this world before we departed from it. With this end in view we ordered our lives and all our actions. We followed the guidance of God's law and spurred each other on to virtue. If it is not too boastful to say, we found in each other a standard and rule for discerning right from wrong."

"Different men have different names, which they owe to their parents or to themselves, that is, to their own pursuits and achievements. But our great pursuit, the great name we wanted, was to be Christians, to be called Christians."

As I sat down after proclaiming the Gospel from the Ambo I was struck by the common thread which characterized the three men about whom I was invited to reflect by Holy Mother Church, John, Basil and Gregory Nazianzen. They knew who they were as men because they knew who Jesus is. Do we know who we are as men? Do we know who Jesus is? The two questions - and the answers which they invite - will determine the path of our lives.

This age cries out for authentic Christian men. We use an expression to refer to men who are comfortable in their skin and content with being men. We say of such a man "He is a man's man". In the past I have reflected on the greatest example, next to Jesus Himself, of such a man. His name was Joseph. On this Feast we are offered three more, John, Basil and Gregory Nazianzen.

The Lord is still inviting Christian men to become all we can be in Jesus Christ and to spur one another on in heroic virtue. In an age so desperately in need of men of courage and Christian conviction, we are given examples out of the pages of our own Christian history. We need to follow their example by courageously, humbly and faithfully loving Jesus Christ and learning to be friends, in Him, and with one another.

Basil and Gregory Nazianzen, along with Basil's younger brother Gregory of Nyssa, are collectively referred to as the  Cappadocians because they came from the same "hometown", a region in what is now Turkey. They went on to become not only holy and heroic Christian men, but three of the finest theologians of the early Church.

Gregory  Nazianzen once proclaimed in his teaching on the implications of the Incarnation of Jesus Christ, "whatever was not assumed was not healed". In that extraordinarily important theological insight we understand one aspect of the danger of the denial of the sacred humanity of Jesus. Redemption would not be complete without Jesus, the New Adam, assuming the entirety of the human experience.

Part of what was assumed and healed in the Incarnation of Jesus Christ was our capacity to love - in all of the beautiful expressions of that sublime word. It was the beloved disciple John who made it all so clear in his first Letter, "God is love, and he who abides in love abides in God, and God abides in him." (Jn. 4:16) The love of friendship reveals and participates in the Love of God.