Toniolo espoused all the social doctrine principles we take for granted today. 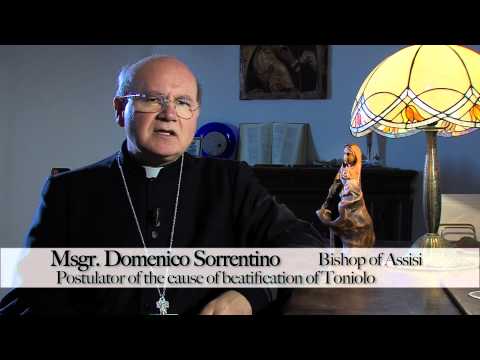 CORPUS CHRISTI, TX (Catholic Online) - On April 29, 2012, at a ceremony at the Basilica of St. Paul Outside the Walls, the Catholic Church beatified Giuseppe Toniolo (1845-1918).  Blessed Giuseppe Toniolo has the unusual accolade of being the first economist in the history of the Church to have received the honor of beatification.  We might also call him the patron beatus of Catholic Social Doctrine.

Giuseppe Toniolo, the first of four children, was born in 1845 in the town of Treviso to a middle class family with solid religious grounding.  As a young lad, Toniolo studied at St. Catherine's School (later known as the Foscarini) in Venice.  Later, Toniolo studied jurisprudence at the University of Padua.

Toniolo took his duties as a professor seriously.  He saw his students as an extended family.  As he expressed it in a diary entry, he saw them as a sacred deposit, as friends of his heart to guide in the ways of the Lord.

As a Professor of political economy, Toniolo wrote many books and articles.  He was unashamed of the God question which he answered ebulliently in the affirmative.  "The economy," he wrote, "is an integral part of the operative design of God, to the extent that. understood properly, participation in it ought to be considered a religious obligation, an obligation of justice and charity to one's neighbor and to one's self."

Toniolo was an early proponent of Catholic social teaching at a time when the Industrial Revolution had ushered in all sorts of social problems.  The Church was confronting these "new things" in the light of the Gospel, and Toniolo contributed his prodigious intellectual talents in arriving at well-founded solutions to those social problems that fit with the Church's understanding of man and of society.

As one of the vanguard of social justice and an expert in socio-economic problems, Toniolo helped set the framework for social teaching that eventually would become formalized in Pope Leo XIII's encyclical Rerum novarum, the foundational document of Catholic Social Doctrine.

Toniolo espoused all the social doctrine principles we take for granted today.

For example, recognizing the problems arising between the relationship of capital and labor, he advocated labor unions as a means to equalize the relationship.  But as an early Catholic voice in support of labor unions, he resisted the Marxist-Socialist inspired "red" unions, instead advocating "white" unions that rejected aberrant Marxist and Socialist social principles.

Toniolo also fought against such social evils like the exploitation of workers and child labor.  He insisted that employers pay their workers just wages, that they limit work hours, and that they provide mandatory days for rest.  He also advanced agricultural reforms, promoting dairy cooperatives in northern Italy.

He was also an advocate of what today we know as subsidiarity.  In Toniolo's day, the principle was known as "corporatism," but the concept was essentially the same.  The principle of corporatism-like the principle of subsidiarity-provided that in social matters a higher corporate body should not interfere in the internal life of lower order corporate body, thereby depriving the latter of its functions.  Rather, the higher order should only support the lower order in case of need and help to coordinate its activity within the activities of the rest of society, and always with a view to the common good.  The same is true with respect to the individual, in that one should not withdraw from individuals and commit to the community what the individual can accomplish by his or her own enterprise or industry.

One of Toniolo's distinctive characteristic was his partisan independence.  He transcended left and right.  He saw clearer than the liberals who based their teachings on Freemasonry, and he saw further than the Traditionalists who simply refused to budge from sclerotic formulas of another time.

He neither advocated the laissez faire capitalism of Adam Smith nor the statism and socialism of Karl Marx and Friedrich Engels.  Steering between these two false philosophies-one based upon atomistic individualism and the promotion of greed, the other based upon the denial of private property and an overadulation of the State-he espoused a middle position consistent with the virtue we now call solidarity.

Toniolo was a model layman, in fact a lay activist, who practiced the faith in the world, using his considerable talents and his education to help promote the Gospel and incorporate it into modern life.

He was at the forefront of the Catholic Action movement, and insisted that Catholics be front and center in politics so as to assure that the yeast of Christ would leaven the dough of society.

His commitment to the Church and to the Magisterium was impeccable.  "I desire and want, with the grace of God, to adhere to the Holy See in every argument without exception."  Would that some of our self-styled "Catholic" politicians and advocates of social justice adhere to Toniolo's authentic Catholic formula!

But for all his fidelity to Magisterial teaching and the Church hierarchy, Toniolo was not a mindless mouthpiece for the clergy.  Along with his rigorous obedience to the Holy See was also an active, dynamic, and engaging mind that sought to understand and implement intelligently and honestly the social doctrines of the Church in all the contingent circumstances Italy then faced.

Toniolo was also married, and his family life was exemplary.  In 1878, he married Maria Schiratti, and together they had seven children, three of whom died young.  He had an unconditional love for his family.

Toniolo's activities are indicative of his great contributions.

In 1870, he founded the beginnings of a Catholic university in Milan, originally called the Institute of Superior Studies.  This germ of an institution eventually developed into the impressive University of the Sacred Heart in Milan.  He stated that for the forty years of his life that he had devoted himself to Catholic Action, he had suffered at not seeing a Catholic University that would be the central nucleus, foundation, and sustenance of Catholic Action.

In 1889, Toniolo founded the Catholic Union for Social Studies (Unione Cattolica per gli Studi Sociali).  In 1893, he founded the International Review of Social Sciences (Rivista Internazionale de Scienze Sociali).  He was also the impetus behind the Catholic periodical "Social Weeks" (Settimane Sociali) which helped inform Catholics of social and economic issues.

In 1894, he penned the famous "Program of Milan," which was the operative Catholic platform against the evils of socialism and which promoted the notion of a Christian democracy.

For Toniolo, a rightly-ordered democracy was "a civil order in which all social, legal, and economic forces, within the fullness of hierarchical development, cooperate proportionally to the common good, on the basis of liberty, fraternity, and justice, with the intention of promoting the social role of everyone, and in the last instance benefiting especially the poor."

His vision of Democracy was different from the secular liberalism of today.  Democracy for Toniolo, was not just mere procedure, but represented the concrete organization of civil society in the light of the Gospel, its values, and its virtues.

After his death in 1918, Toniolo was buried at the town Pieve di Soligo.  But his body was not to lie unmolested for long.  His sanctity would not remain quiet.

The process of Toniolo's canonization began in 1951.  Twenty years later in 1971, Pope Paul VI declared Toniolo "venerable."  On January 14, 2012, Pope Benedict XVI authorized the Congregation for the Cause of Saints to promulgate the decree that certified a miracle attributed to Toniolo's intercession, thereby setting the stage for Toniolo's beatification.  (The miracle occurred to a young man in his 30s named Francesco Bortolini, who was cured of his serious injuries sustained as a result of an accidental fall.)

On April 29, 2012, at a ceremony presided over by Cardinal Salvatore De Giorgi, at the Basilica of St. Paul Outside the Walls, Toniolo was declared a beatus, the last step before his canonization.
Giuseppe Toniolo's beatification "comes at the most appropriate moment," said Bishop Domenico Sorrentino, the postulator for Toniolo's cause, when all Catholics "need to find their deepest roots in bearing witness in society."

We might close with the prayer for Giuseppi Toniolo's canonization:

Lord Jesus,
We thank you for giving us
your servant Giuseppe Toniolo, an
exemplary husband and father, and a
University professor who was a wise educator of youth.
He dedicated his life
entirely to your Kingdom,
witnessing to the Gospel
as the source of salvation
for culture and society.
Allow that his example
may impel us to love you
as he loved you, and
that his intercession
may support us and help us
in our need.
Give to the Church,
which he so loved and served,
the opportunity to honor him
as saint on your altars
on account of you,
as an witness of lay holiness
to the glory of the Most Holy Trinity.
Amen.