The North American Martyrs: Our Founding Fathers in Faith

This quadricentennial of the Jesuit mission gives us cause to look to our spiritual roots.

They set out into lands where a violent, gruesome death was constantly before them.  We set out into an increasingly anti-religious culture where we might lose a few friends for standing up for the truth. They set out on canoes into uncharted waters. We set out in our cars to work or the supermarket. 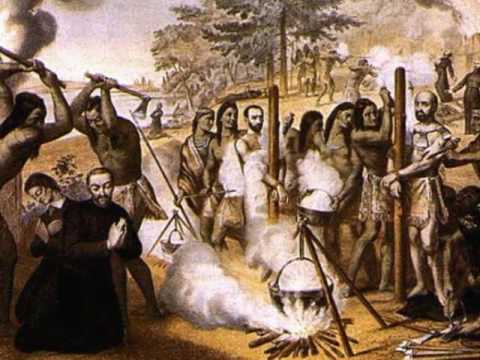 P>DENVER, CO (Catholic Online) - As I knelt staring at St. John de Brebeuf's skull through the glass case at the Martyr's Shrine in Midland, Ontario, I thought about the courage of our founding fathers of faith in North America.

In 1611, Jesuit missionaries first set foot on our continent.  Within forty years eight of them, (whose feast day is October 19th) gave up their lives near the Georgian Bay and in upstate New York.  This quadricentennial of the Jesuit mission gives us cause to look to our spiritual roots.

Much like the setting sun, we often see the full beauty of the Saints as their mortal light exits this world.  This is especially true of martyrs.  The following is a brief summary of a few of the deaths of these Jesuits, which sums up the heroism with which they lived.

When St. Isaac Jogues was received into the Jesuits his superior asked what he desired.  His response: "Ethiopia and Martyrdom."  "Not so." was the reply.  "You will receive Canada and martyrdom."

After years of ministry among the Huron, St. Isaac Jogues was captured and tortured by the Mohawk Indians.  On the verge of execution, he escaped and was smuggled back to France by the Dutch.  He quickly rose to "stardom."  Everyone regarded him as a living Saint and national hero.  The Queen of France even stooped to kiss his mangled hands, fingers missing, having being cut or gnawed off by his torturers.  St. Isaac could have retired in the safety of France but returned to his mission as soon as he was able.  He was killed by a Mohawk brave with a tomahawk.

St. Charles Garnier was ministering to his Huron village when it was attacked.  He ran from one burning cabin to another, baptizing and comforting his people when he was shot in the upper chest and lower abdomen.  After regaining consciousness he saw a wounded Huron writhing across the room.  He pulled himself up and struggled toward the dying man to help him.  An Iroquois brave noticed and killed him with his hatchet.  He died with hand outstretched, reaching to minister to the wounded.

St. Rene Goupil was a layman who worked side by side with the Jesuits.  When St. Isaac Jogues was captured there was a time when St. Rene could have easily escaped but chose to stay with his friend.  He endured weeks of disfiguring tortures, during which he comforted and converted fellow captives who were suffering a similar fate.  He was tomahawked while walking side by side with Jogues for teaching a child how to make the sign of the cross.  He fell to the ground saying the name of Jesus.

St. Anthony Daniel had just finished celebrating Mass with his Huron friends at sunrise when the war cries of the Iroquois rang out through his village.  He went to those who had been butchered to comfort and baptize them in their last moments.  When the Iroquois were headed toward his church to burn it down he sprinted toward them and commanded them to stop.  They did for a moment, stunned by this unarmed man's courage.  Then they brought him down with muskets and arrows.

St. John de Brebeuf was a huge man with amazing courage.  Though he lived under constant threat of death, a fellow missionary wrote, "Nothing could upset him during the twelve years I've known him."

He was the first missionary to enter Huronia.  In time he became like one of them.  He wrote instructions to those who wanted to join his mission starting with, "You must love these Huron, ransomed by the blood of the Son of God, as brothers."

Though he could have escaped, he chose to die with them when Iroquois raided their village.  The younger St. Gabriel Lalemont, who had looked up to St. John, remained and died with him as well.  Together they underwent some of the most gruesome tortures of any martyr in history for endless hours.  Through it all they comforted their fellow captives.  John reminded them, "The sufferings will end with your lives.  The grandeur which follows will never have an end."

Seven years after their deaths, the daughter of an Iroquois chief was born in the very tribe that killed them.  She is known today as Blessed Kateri Tekakwitha, the first Native American to be beatified, proving true the words spoken by Tertullian 1,400 years before these martyrs entered paradise, "The blood of martyrs is the seed of the Church!"

These men set out into nations where a violent, gruesome death was constantly before them.  We set out into an increasingly anti-religious culture where we might lose a few friends for standing up for the truth, or at worst, get mocked or sued, but probably not tomahawked.  They set out on canoes into uncharted waters filled with tribes who were hunting them down.  We set out in our cars to work or the supermarket to bump shoulders with a world that needs to be reminded of God through our words and our charity.

If only we had a little of the courage of our founding fathers in faith.

Speaker and author Chris Stefanick is Director of Youth, Young Adult and Campus Ministry for the Archdiocese of Denver.  Visit him at http://www.chris-stefanick.com/