Blessed Bartolo Longo: The Ex-Satanist On the Path to Sainthood

Angelo Stagnaro visits the resting place of Blessed Bartolo Longo, the turbulent occultist who become a champion of the rosary

He consecrated the world, entrusting it to Mary's hands, offering the Blessed Virgin a golden rose. In his homily, Benedict XVI likened Bartolo Longo to St Paul of Tarsus, who also initially persecuted the Church, described Bartolo as being "militantly anticlerical and engaging in spiritualist and superstitious practices". 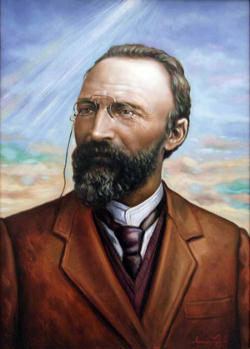 P>LONDON, England (UK Catholic Herald) - The tomb of Blessed Bartolo Longo in the Basilica of Our Lady of the Most Holy Rosary in Pompeii. About three million pilgrims visit the basilica each year.Pompeii has more to offer than dusty ruins filled with plaster casts of people, and one unfortunate puppy, frozen in time. It is also, coincidently, home to the only church in Christendom built by an ex-Satanist.

It's the same old story: boy from a religious family goes away to university, falls in with a bunch of New Age Satanists, becomes a satanic high priest, thinks better of his decision and ultimately reverts to the Church; it's the basic satanic-rags-to-saintly-riches story.

I didn't believe this story when I first learned about Blessed Bartolo Longo either. Having grown up the son of Italian immigrants, I was regaled with all of the lurid stories of El Barto's excesses, debauchery and general dissoluteness. I came to Pompeii not just for the ruins but also to see if the stories were true.

Bartolo Longo was born on February 10 1841 to a wealthy family in the small town of Latiano, near Brindisi in southern Italy. His parents, Dr Bartolomeo Longo and Antonina Luparelli, were devout Catholics who prayed the rosary together daily.

But none of these activities brought him joy. In fact, his life was marked by extreme depression, paranoia, confusion and nervousness. He even began to show signs of demonic obsession, as opposed to demonic possession, which included being inflicted by diabolical visions and continually declining poor health. He ultimately experienced a mental breakdown.

In his despair, he heard the voice of his deceased father urging him to "Return to God! Return to God!" In fear and desperation, Longo turned to Professor Vincenzo Pepe, a friend from his home town, for guidance. Vincenzo convinced Longo to abandon Satan and introduced him to the Dominican priest, Fr Alberto Radente. Fr Radente heard his Confession and helped him to further reclaim his life.

One evening, as he walked near-chapel at Pompeii, Bartolo had a profound mystical experience. He wrote: "As I pondered over my condition, I experienced a deep sense of despair and almost committed suicide. Then I heard an echo in my ear of the voice of Friar Alberto repeating the words of the Blessed Virgin Mary: 'If you seek salvation, promulgate the rosary. This is Mary's own promise.' These words illumined my soul. I went on my knees. 'If it is true. I will not leave this valley until I have propagated your rosary.'"

To prove his new-found commitment to Christ and His Church Bartolo even attended a séance. In the midst of it, he stood and raised a medal of the Blessed Virgin Mother and cried out: "I renounce spiritism because it is nothing but a maze of error and falsehood."

On March 25 1871, as part of his self-imposed penance, Longo became a Third Order Dominican, taking the name Brother Rosario in honour of the rosary. He joined a charitable group in Pompeii and worked alongside Countess Mariana di Fusco, a wealthy local widow whom he married a year later on Pope Leo XIII's recommendation.

The happy couple decided to start a confraternity of the rosary. To serve as a spiritual focus for this group, Bartolo needed a painting of the Blessed Virgin. Sister Maria Concetta de Litala of the Monastery of the Rosary at Porta Medina offered him one that she got at a Neapolitan junk shop. She paid only 3.40 lire - a tiny, insignificant sum even at the time.

The painting portrayed Our Lady of the Rosary with St Dominic and St Catherine of Siena. Though it was of modest artistic accomplishment and in very poor condition, it served Bartolo's purpose. He described it in his journal: "Not only was it worm-eaten, but the face of the Madonna was that of a coarse, rough country-woman . a piece of canvas was missing just above her head . her mantle was cracked. Nothing need be said of the hideousness of the other figures. St Dominic looked like a street idiot. To Our Lady's left was a St Rose. This I had changed later into a St Catherine of Siena . I hesitated whether to refuse the gift or to accept . I took it."

In addition, the sorcerer turned born-again Catholic restored a ramshackle church in October 1873 and then sponsored a feast in honour of Our Lady of the rosary. He installed the repaired painting in this very church. Within hours of its installation miracles began to be reported and people came to the church in droves. Seeing the devotion of the pilgrims, the Bishop of Nola encouraged Bartolo to construct a larger church. He approached architect Giovanni Rispoli to build it, making the following appeal: "In this place selected for its prodigies, we wish to leave to present and future generations a monument to the Queen of Victories that will be less unworthy of her greatness but more worthy of our faith and love."

Work on the larger building began on May 8 1876 and was consecrated in May 1891 by Cardinal La Valetta who represented Pope Leo XIII. In 1906, he and his wife donated the Pompeii shrine to the Holy See but this didn't diminish his evangelistic zeal. Bartolo continued promoting the rosary until his death in1926, at the age of 75. To spread devotion to the rosary and to the Blessed Virgin Mary Bartolo would evangelise young people at parties and in local cafes, explaining the dangers of occultism. He would witness continually as to the glories of Christ, the munificence of His mother and the beauty of the Catholic Faith.

In 1939 the church was enlarged and re-consecrated as a basilica and officially renamed the Basilica of Our Lady of the Most Holy Rosary of Pompeii. It soon became a focus of pilgrimages for more than a century as most Catholics and non-Catholics alike found a church built by a reformed ex-Satanist to be devilishly irresistible.

Bartolo had died a saintly death and his Cause for canonisation was almost immediately called for. He was beatified by John Paul II on October 26 1980 who called him the "Apostle of the Rosary". More than 30,000 people attended the ceremony, and 50,000 pilgrims attended Pope Benedict's historic pastoral visit to the shrine on October 19 2008. He consecrated the world, entrusting it to Mary's hands, offering the Blessed Virgin a golden rose. In his homily, Benedict XVI likened Bartolo Longo to St Paul of Tarsus, who also initially persecuted the Church, described Bartolo as being "militantly anticlerical and engaging in spiritualist and superstitious practices".

He continued by saying: "Wherever God comes in this desert, flowers bloom. Even Blessed Bartolo Longo, with his personal conversion, bears witness to this spiritual power that transforms man from within and makes him capable of doing great things according to God's designs. This city which he re-founded, is thus a historical demonstration of how God transforms the world: filling man's heart with charity."

It's not easy to get lost in Pompeii but I somehow managed to do exactly that. I finally spied the famous bronze cross that adorns the Basilica's campanile. Apparently I am not the only person in the Sarno Valley to use it to orient myself. Technically speaking, every Christian uses the cross to orient himself so I wasn't in the least bit ashamed for having to do so.

The white surface of the domed basilica and its lateral chapels both strike and comfort the visitor. The façade is only a little more than a century old, having been re-pointed by the architect Rispoli in 1901. As I passed the long passageways adjacent to the basilica, I noted that this is where Bartolo and his wife would stand to hand out food to the poor who would gather daily.

Upon entering the church one is struck not by its silence but rather the pervasive hushed susurration of pilgrims who stand in awe at the church's beauty and God's presence. The walls are replete with frescos, marble ornaments, mosaics, paintings and the ever-present votives. These small silver or tin plaques in the shape of heads, hands, legs and eyes hang everywhere as tokens of thanksgiving for Mary's received protection and prayers.

The neoclassical Basilica of Our Lady of the Rosary of Pompeii is decorated in the stereotypically exaggerated, over-the-top, pietistic art of the Italian peasantry that makes you smile and secretly wish you were Italian. It is, for good or bad, the art one associates with ancient churches and an even older faith. Stepping into this basilica reconnects one with 2,000 years of Christ's presence in the world and in our hearts.

I asked as to the whereabouts of Blessed Bartolo and soon found myself face to beatified face with the Apostle of the Rosary himself. Like every other pilgrim standing next to me, I realised that this former, self-professed enemy of the Church rests peacefully in a tomb in its bosom of the very church he had hoped to destroy. More delicious and blessed irony one can hardly imagine.

As I looked at the oversized painting of Our Lady of Pompeii hanging over the church's altar, I recalled St Maximilian Kolbe's poignant words: "If anyone does not wish to have Mary Immaculate for his Mother, he will not have Christ for his Brother."

One can't but be moved when seeing this painting of him and recall the pain, horror and revulsion that this satanist-turned-saint experienced when he was confronted by his own sins.

Every student knows what happened to the city of Pompeii on August 24 79 AD. But most people don't realise that the "new" Pompeii rose from the destroyed city's ashes 1,796 years later because of Our Lady of the Rosary and her devotee. In his The History of the Shrine of Pompeii Bartolo wrote:

"Next to a land of dead appeared, quite suddenly, a land of resurrection and life: next to a shattered amphitheatre soiled with blood, there is a living Temple of faith and love, a sacred Temple to the Virgin Mary; from a town buried in the filth of gentilism, arises a town full of life, drawing its origins from a new civilization brought by Christianity: the New Pompeii!. It is the new civilisation that openly appears beside the old; the new art next to the old; Christianity full of life in juxtaposition to long-surpassed paganism."