Through his love for Jesus and through his love for Mary whose "fiat" brought Mercy into the world, he will be forever remembered as a humble and living image of what humanity unceasingly seeks: the regenerative and healing mercy of Christ Jesus. 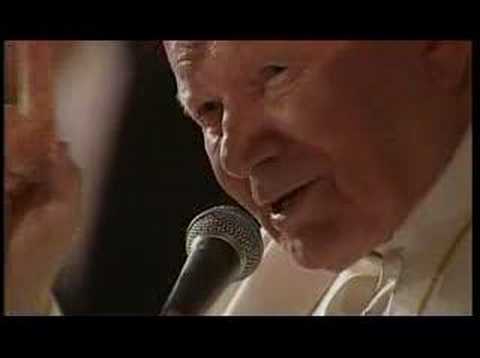 GLADE PARK, CO (Catholic Online) -- Today on this Divine Mercy Sunday the Mass for the Beatification of Venerable Pope John Paul II will begin at 10:00 a.m. It is truly a sacred moment for which the world has long yearned. During the Rite of Beatification, Pope Benedict XVI will raise to the Altar his beloved friend and predecessor, a truly extraordinary Pope whom the entire world knew and loved, and whose memory will remain infused within us all with deep tenderness and veneration for all ages to come.

The Mass will be preceded by a gathering of the faithful to recite the Devotion of Divine Mercy, a prayer in which we offer to the Father the most precious Body, Blood, Soul and Divinity of his dearly beloved Son, our Lord Jesus Christ, in atonement for our sins and the sins of the whole world. In reciting this profound prayer, we are spiritually united with the Paschal Mystery of our Savior who so unreservedly gave of himself for our sake.

Too, we immediately recall the gift of the Risen Lord in Eucharist -- the supreme gift of Christ himself, perpetuated throughout all time, in which Jesus the Christ unites his own sacred body to ours in an act of incomparable mercy, and thus draws us with profound and tender delicacy into his own life of everlasting Love.

As Pope Benedict has pointed out, that the Second Sunday of Easter, Divine Mercy Sunday, was chosen as the day on which Venerable John Paul II would become Blessed John Paul II is significant. If it were possible to sum up John Paul II's pontificate in a word, I think it would be "mercy." There is perhaps no one who has looked into this saint's eyes and not seen reflected there the great abyss of Mercy Itself.

Further, we have seen it not only in John Paul II's eyes, but in his compassionate, tender, and knowing smile; we have felt it in the tone of his voice; we have witnessed it reflected in the crowds who flock before him and wait in silent anticipation of his strikingly meaningful words which, through and in and with Christ, were so masterfully articulated to a spiritually hungry flock.

John Paul II seemed to have not simply a grasp of the needs and troubles of humanity, but rather displayed an intimate connection with the desires, frustrations, fears and weaknesses of the people spread across the world. His words had the ability to stir us in the depths of our hearts, remain there, and resurface time and again throughout the days and years. It was as if he saw with more than human eyes: he looked upon mankind from within and without, always assisted by the divine promptings of the Holy Spirit whose love guided his thoughts, words and actions.

Yet above all, in his words, teaching, and exquisite writing, the message of Christ's mercy shines through. Such a wondrous and life-giving message is the proclamation of the universal Church; it is the heartfelt plea of humankind; it is the desire of every man, woman and child who has experienced failure, hurt, and disappointment in life; it is a treasure for which we strive and thirst. Further, it is a free Gift which God has promised, and which is sealed in the consummation of God's love: the Person of Jesus Christ.

John Paul II, again and again, directed us toward a face-to-face encounter with Mercy Itself -- a healing and regenerative encounter we so desperately need. In the third year of his pontificate he wrote in Dives in misericordia of the prayer of the Church in our times: "The Church proclaims the truth of God's mercy revealed in the crucified and risen Christ, . . . Furthermore, she seeks to practice mercy towards people through people, and she sees in this an indispensable condition for solicitude for a better and 'more human' world, today and tomorrow.

"However, at no time and in no historical period -- especially at a moment as critical as our own -- can the Church forget the prayer that is a cry for the mercy of God amid the many forms of evil which weigh upon humanity and threaten it. Precisely this is the fundamental right and duty of the Church in Christ Jesus, her right and duty towards God and towards humanity. The more the human conscience succumbs to secularization, loses its sense of the very meaning of the word 'mercy,' moves away from God and distances itself from the mystery of mercy, the more the Church has the right and the duty to appeal to the God of mercy 'with loud cries.'

"These 'loud cries' should be the mark of the Church of our times, cries uttered to God to implore His mercy, the certain manifestation of which she professes and proclaims as having already come in Jesus crucified and risen, that is, in the Paschal Mystery. It is this mystery which bears within itself the most complete revelation of mercy, that is, of that love which is more powerful than death, more powerful than sin and every evil, the love which lifts man up when he falls into the abyss and frees him from the greatest threats" (14, 15).

Six years ago, on 2 April 2005, the light in Pope John Paul II's papal apartment was extinguished as his earthly life came to an end on the eve of Divine Mercy Sunday, a feast day which he himself instituted, and which came about as a result of the private revelations of St. Fuastina, whom John Paul II canonized in Rome on 30 April 2000. It is not difficult to see in the timing of his death a providential connection between the message of mercy, which John Paul II so eloquently and movingly promulgated, and the reality of Mercy displayed before the world in our Savior's open arms upon the cross -- an invitation to mercy which seeks to draw humanity into a forever-embrace of Love.

It is also providential that the thousands of Catholics present in St. Peter's square on the eve of John Paul II's death tearfully prayed the Rosary with great devotion; for his love for the Blessed Virgin Mother was great indeed. His profound respect for Mary is highly palpable in his words, prayers, and writings.

Connecting Mary with our Savior's supreme act of mercy, John Paul II noted that Mary is "the one who obtained mercy in a particular and exceptional way, as no other person has. At the same time, still in an exceptional way, she made possible with the sacrifice of her heart her own sharing in revealing God's mercy. This sacrifice is intimately linked with the cross of her Son, at the foot of which she was to stand on Calvary. . . . No one has experienced, to the same degree as the Mother of the crucified One, the mystery of the cross, the overwhelming encounter of divine transcendent justice with love: that 'kiss' given by mercy to justice. No one has received into his heart, as much as Mary did, that mystery, that truly divine dimension of the redemption effected on Calvary by means of the death of the Son, together with the sacrifice of her maternal heart, together with her definitive 'fiat'" (Dives in misericordia 9).

St. Paul affirmed that "the Gentile peoples are to praise God because of his mercy" (Rom. 15:8-9). Blessed John Paul II, through his love for Jesus, and through his love for Mary whose "fiat" brought Mercy into the world, will be remembered as a humble and living image of what we all seek. His words, his careful and masterful teaching of the mysteries of Christ's life, will continue to echo in our hearts and lives. We will not stop missing him; not yet. Nevertheless, we have, again, cause for great joy.

On 5 April 2011, Msgr. Krajewski, a former member of John Paul II's office of Liturgical Celebrations, reflected on the late Pope's death, stating that when he left the papal apartment at the apostolic palace, he saw "a multitude of people walking silently in devotion. The world had closed down, got on its knees and cried."

Today we cry again. However, we cry not tears of sadness, but rather of joy: the world is not closed down: it is raised up as we come together as community and celebrate the elevation of Venerable John Paul II to Blessed John Paul II. We gather today under a new horizon, the horizon of Divine Mercy: we look beyond the present; we reflect on the wonders of God's unfathomable love; we raise our minds and hearts to Christ in praise and thanksgiving: "We praise you, O Lord, and we adore you, for you have done great things for us!"

The world will never forget the Gift of Mercy. Nor will we forget Blessed John Paul II who, always with charity and love, so beautifully articulated the message of mercy with great and penetrating depth. "Blessed John Paul II, pray for us! Through your intercession, obtain for us the ardent desire of our hearts: Mercy!"

F. K. Bartels is a Catholic writer who knows his Catholic Faith is one of the greatest gifts a man could ever have. He is a contributing writer for Catholic Online. Visit him also at catholicpathways.com