As John Paul II took the hand of his would-be-assassin, he showed us that a Christian must forgive his enemies, even when they do not want forgiveness.

Death had appeared all but certain to bystanders when three bullets fired by Turkish gunman Mehmet Ali Agca tore through the pope's flesh on May 13, 1981.  By John Paul II's assessment, "It was a mother's hand that guided the bullet's path." 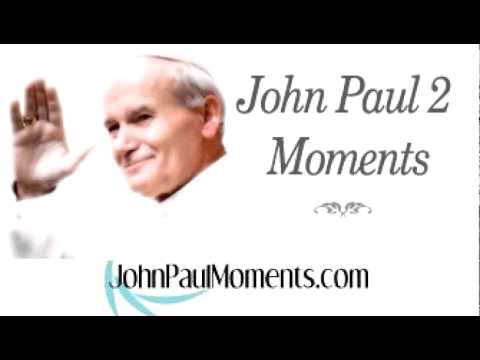 ROME, Italy (John Paul Moments) - On December 27, 1983, as John Paul II sat in a bare, whitewashed jail cell of Rome's Rebibbia prison, he was unprepared for the question voiced by an unshaven prisoner to his side, "So why aren't you dead?"

Why aren't you dead?

Death had appeared all but certain to bystanders when three bullets fired by Turkish gunman Mehmet Ali Agca tore through the pope's flesh on May 13, 1981, staining the pope's white cassock with deathly scarlet.

Ali Agca was a professional assassin, he had aimed at close range, and he had aimed well.  But somehow, the bullets missed lethal targets, one grazing the pope's right elbow, and another deflecting off his left index finger before passing through his abdomen, a fraction of an inch from a major artery.

By John Paul II's assessment, "It was a mother's hand that guided the bullet's path," and permitted that "the dying Pope. stopped on the threshold of death."  The assassination attempt had taken place on the feast of Our Lady of Fatima, and the pope had no doubt that his survival was due to the intervention of the Blessed Virgin Mary.

In gratitude, the Pope gave one of the deadly bullets to the bishop in charge of the shrine at Fatima, Portugal.  To this day, that bullet remains in the crown of the statue of the Blessed Virgin Mary housed at that shrine.

However, as John Paul II sat at the side of his would-be-assassin, Ali Agca expressed fears that this Lady of Fatima might come after him next.  The pope stated the contrary; he himself had come to forgive, not to harm.  But Ali Agca did not ask for forgiveness.

Thus, as the pope took the hand of the gunman, he showed us that a Christian must forgive his enemies, even when they do not want forgiveness.

Randall J. Meissen, LC, author of Living Miracles: The Spiritual Sons of John Paul the Great, is a former professor at Legion of Christ College in Cheshire, Connecticut, and currently works in youth ministry in Valencia, Spain. He can be contacted at rmeissen(at)johnpaulmoments(dot)com.

JohnPaulMoments.com is dedicated to promoting the teaching of John Paul II through the radio and podcast program "John Paul 2 Moments" and various print publications.