Clare of Assisi as Model: Pope Emeritus Benedict XVI Calls for Women of Courage to Renew the Church

The Church is indebted to courageous women

In her convent of San Damiano, Clare heroically practiced the virtues that should characterize all Christians: humility, a spirit of piety and penance, and charity.  Her fame of sanctity and the prodigies that came about thanks to her intervention led Pope Alexander IV to canonize her in 1255, just two years after her death. Her followers, the Poor Clares, still play a vital role in the Church with their prayer and their works. 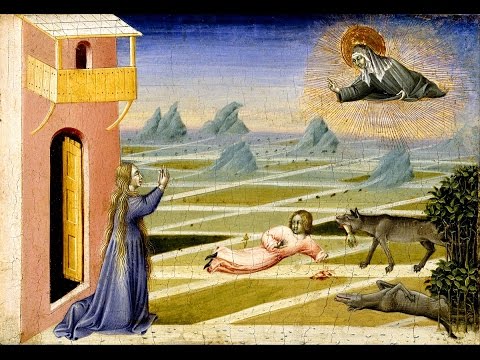 VATICAN CITY (VIS) - "Her witness", Pope Emeritus Benedict XVI once said, "shows us how much the Church is indebted to courageous women rich in faith who, like her, were capable of giving a decisive impulse to ecclesial renewal".

Clare, the Holy Father explained, was born to a rich and noble family. While she was still very young, her relatives decided to arrange an important marriage for her, but at the age of eighteen the saint, in a bold gesture inspired by a profound desire to follow Christ, abandoned her family home in the company of a friend.

She joined the Friars Minor at the church of Porziuncola and Francis himself welcomed her in a simple ceremony, cutting her hair and investing her with the penitential habit. From that moment Clare became a poor and humble bride of Christ, and dedicated herself entirely to Him.

"Clare found in Francis of Assisi, especially at the beginning of her religious experience, not only a master whose teachings to follow but also a fraternal friend. The friendship between these two saints is a beautiful and important element, for when two pure souls enflamed with the same love for God meet, from their mutual friendship they draw a powerful stimulus to follow the path of perfection. Friendship is one of the most noble and exalted human sentiments, which divine Grace purifies and transfigures".

The Flemish bishop and chronicler Jacques de Vitry, who visited Italy during that period, speaks of Clare and her followers in the early days of the Franciscan movement and notes her sensibility towards "a characteristic trait of Franciscan spirituality: ... radical poverty associated with complete trust in Divine Providence".

For this reason the saint received "from Pope Gregory IX, or perhaps earlier, from Innocent III", the so-called "Privilegium Paupertatis" according to which Clare and her followers "could possess no material property. This", Benedict explained, "was a truly extraordinary exception to then current Canon Law, granted by the ecclesiastical authorities of the time in appreciation of the fruits of evangelical sanctity they saw in the lifestyle of Clare and her sisters who joined with her.

"This shows", he added, "how even during the Middle Ages women played an important not a secondary role. In this context it must be remembered that Clare was the first woman in Church history to produce a written Rule, approved by a Pope, so that the charism of Francis of Assisi could be conserved in all the many female communities which were coming into being at that time, and which sought to draw inspiration from the example of Francis and Clare.

"In her convent of San Damiano, Clare heroically practiced the virtues that should characterize all Christians: humility, a spirit of piety and penance, and charity".  Her fame of sanctity and the prodigies that came about thanks to her intervention led Pope Alexander IV to canonize her in 1255, just two years after her death. Her followers, the Poor Clares, still "play a vital role in the Church with their prayer and their works", Pope Emeritus Benedict XVI concluded.