Catholic Clergy and Church Officials Say They Can't Tell Us Which Party to Vote For. How about in Germany 1933?

Catholics who understand that the sanctity of life is the foundation of all human rights have been begging their priests and bishops to provide clearer guidance to the faithful.  They implore them in this critical election season to warn their people about the radical and diabolical abortion platform of the Democratic Party. 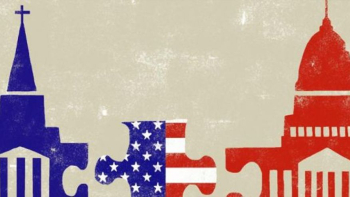 How should Catholics vote? As if millions of lives depends upon it.

Pro-life advocates plead with their spiritual leaders to share that, given this platform, a Catholic cannot in good conscience vote for representatives of this party.

The response from church clergy and lay officials is often along these lines:

Given our non-profit status, we cannot tell Catholics to "vote pro-life."  We cannot tell them not to vote for the Democrat Party.

There are other equally valid social issues that voters can weigh when making their voting decisions.

Let's go back in time and see if this advice holds up during another volatile period in history.

In the platform of the German Nazi Party, we find the following proposals to promote the health and welfare of the nation's citizens:

- The state is to [advance] national health by protecting the mother and child, by outlawing child-labor, by the encouragement of physical fitness.

- We demand the education at the expense of the state of outstanding intellectually gifted children of poor parents without consideration of position or profession.

- We demand an expansion on a large scale of [welfare services for the elderly.]

- We demand the creation of a healthy middle class and its conservation... We demand that the State shall above all undertake to ensure that every citizen shall have the possibility of living decently and earning a livelihood.

Separately, the position of the Nazi party on the Jewish people was clear, even before formal extermination plans were enacted in January 1942.

In 1922, Hitler told journalist Josef Hell, "Once I really am in power, my first and foremost task will be the annihilation of the Jews."

So based on the reasoning of some Church officials, a priest or bishop faced with the rise of the Nazi Party in an election year should guide the voting faithful with the following advice:

We can't tell you what party to vote for.  When you cast your vote, you have to weigh the murderous designs of Nazi Party ideology targeting Jews, with the party's position on other equally valid social justice concerns such as healthcare, social welfare, economic justice, etc.

With the clear eyes of historical perspective, such a position is absurd, and morally wrong. Now if we truly believe what the Church teaches about abortion, what is the difference?

From the Catechism of the Catholic Church:

2271 Since the first century the Church has affirmed the moral evil of every procured abortion... abortion willed either as an end or a means, is gravely contrary to the moral law...Life must be protected with the utmost care from the moment of conception: abortion and infanticide are abominable crimes. Formal cooperation in an abortion constitutes a grave offense.     (My emphasis-KB)

For a faithful Catholic, there is no debating the intrinsic evil of abortion.

Some well-meaning religious, clergy and laity link the pro-life position to what they consider equally valid issues of social justice.  This leads them to advocate for a party and candidates with the most radical pro-abortion platform in history: Taxpayer funded abortion through all nine months of pregnancy, and death for babies born alive in botched abortion.

This has enabled the Democratic Party to continue to rely on the "Catholic Vote," while becoming more aggressively pro-abortion. It has compromised the Church's mission, and fractured her unity.  This compromise with evil has also led to the polarization of our political process.   Those who understand that abortion is an abominable crime, and the right to life is the foundation of all human rights, only have one party to which they can entrust their vote.

"It is impossible to further the common good without acknowledging and defending the right to life, upon which all the other inalienable rights of individuals are founded and from which they develop.

....Only respect for life can be the foundation and guarantee of the most precious and essential goods of society, such as democracy and peace."    (St. John Paul II, Evangelium Vitae - The Gospel of Life)