Judge Amy Coney Barret is well qualified for her post, it's time to confirm her

It is time to confirm judge Amy Coney Barrett to the United States Supreme Court. Despite the many attacks against her, there is no issue of substance that credibly disqualifies her from the job. 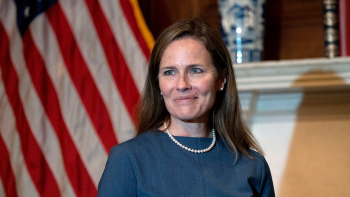 LOS ANGELES, CA (California Network) - It is time to confirm judge Amy Coney Barrett to the United States Supreme Court. President Trump lawfully and responsibly nominated her as part of his Constitutional duty, and it is time for her to receive a fair hearing and vote.

Objections to her appointment are based on weak justifications. First, President Trump should not nominate a new justice so close to a presidential election. And second, she is a devout Christian who was previously affiliated with a conservative Christian organization called, "People of Praise."

The first argument that the President should refrain from nominating a new justice close to an election isn't grounded in any legal basis. As Justice Ruth Bader Ginsberg herself once stated, a president does not stop being president in their final year in office. Under the Constitution, the president has both a right and a responsibility to nominate justices to fill vacancies in the court.

Critics are quick to make two retorts; that President Obama was denied the same exercise of power during the last year of his presidency, and no president has nominated a justice so close to an election. They may also add a final point that early voting has already begun.

Again, none of these objections are based in law, merely past example. But prior example is not sufficient reason to strip a president of their Constitutional powers. As for the denial of President Obama's choice, that is credited to the makeup of the Senate, which exercises the will of the states and their constituencies. In 2016, the Senate rejected President Obama's attempt to nominate Merrick Garland to the highest court. The Senate argued that the people had spoken in previous elections to oppose many of the policies of the Obama administration and it was therefore their duty to maintain that opposition in service to public demand. The Senate then argued the upcoming election would serve as a referendum. The 2016 election did exactly that and affirmed the Senate's decision.

As part of my reporting on this topic, I reached out to Deacon Keith Fournier, the Dean and Chaplain of Catholic Online School. Deacon Fournier, is also a Constitutional Lawyer. He served as the first Executive Director of the American Center for Law and Justice (ACLJ) and has been a lawyer for forty years. He echoes the resounding praise for the selection of Amy Coney Barrett which has come, not only from the Catholic and broader Christian community, but from anyone who sincerely considers her qualifications for the U.S. Supreme Court. Deacon Fournier told this writer:

"Judge Amy Coney Barrett may be the most qualified candidate for the United States Supreme Court who has been selected in my lifetime. She has impeccable academic credentials, an accomplished history of  legal scholarship, and proven experience on the Bench. She is a solid constitutionalist, a devoted wife and mother, and a person of great moral integrity. Only those who disagree with her judicial philosophy or those who seek to exclude faithful Catholics and other Christians from the bench could possibly oppose her selection.

"As for excluding her precisely because of her sincere Catholic faith, Article Six, Section Three, of the Constitution of the United States is crystal clear:

"...The Senators and Representatives before mentioned, and the Members of the several State Legislatures, and all executive and judicial Officers, both of the United States and of the several States, shall be bound by Oath or Affirmation, to support this Constitution; but no religious Test shall ever be required as a Qualification to any Office or public Trust under the United States.

"She should be quickly confirmed. She will be a great asset to the Court at this important moment in the history of the United States."

Logically, if the political situation were reversed, nobody believes the Democrats in the Senate would pass on an appointment either, so the entire line of argumentation is disingenuous.

Ultimately, the party in power will always exercise their right to confirm or deny the decision of the president in accord with their political beliefs. This is why people vote for one party over another.

The other great objection offered against Barrett is her affiliation with a Christian community known as the People of Praise. Barrett is also a devout Roman Catholic.

These Christian communities are naturally conservative. The People of Praise organization accepts traditional Biblical teachings because... that's literally what it means to be a Christian. A person's faith has never been a lawful disqualification for service as a judge, nor should it be. If Barrett's Catholicism were reason to disqualify her, then why not have the same conversation about Vice President Joe Biden who is also Catholic? And if membership in a worship community is reason to disqualify a person, then how many people would be disqualified from other posts? Barrett is already serving as a judge now, yet there are no valid objections to that posting.

The heart of the problem is not what the Senate did during Obama's presidency, or what Barrett believes. The heart of the problem is her predicted rulings on anticipated abortion cases. Some Americans are certain that Barrett will rule against abortion as soon as a case is presented to her, and on that basis, they are objecting to her nomination. Of course, those individuals do not want to make abortion itself the topic of discussion, so other arguments are presented instead. But nobody is fooled.

The fact is, half of all Americans disagree that abortion is the murder of a living human being. Yet this flies in the face of scientific fact. It is a fact that life begins prior to birth. The cells which combine to make a living person are alive prior to conception, and at the moment of conception a new human person is created, even if the form of that person is described in terms of cells rather than the features of an adult. There is no clearer bright-line than the moment of conception. And all the cells involved in the process of conception until the moment of natural death are human cells.

So, abortion is the killing of a human individual. Full stop. Because some people refuse to recognize this, those who want the (nonexistent and positive) "right" to kill another human individual inside its mother's womb are strenuously objecting to Barrett's nomination.

There's no way to argue with people who deny scientific facts. There are no arguments you can offer to convince them to accept facts they reject for personal reasons. All we can do is pray for these individuals, to be respectful and kind, and to engage in respectful dialogue when they are ready to do so. We apologize, (meaning to explain and defend) but we still have a duty to vote with an informed conscience.

In the meantime, it is time to confirm Justice Amy Coney Barrett, because there's literally no good reason not to.