US bishops: Israel and Palestine must 'negotiate directly' if there is to be peace

After US president Donald Trump and Israeli president Benjamin Netanyahu last month proposed a two-state peace plan for Israel and Palestine, the bishops of the United States are encouraging Israel and Palestine to "negotiate directly" with each other and agree on a common resolution for peace. 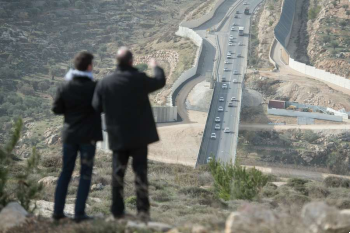 Washington D.C., (CNA) - After US president Donald Trump and Israeli president Benjamin Netanyahu last month proposed a two-state peace plan for Israel and Palestine, the bishops of the United States are encouraging Israel and Palestine to "negotiate directly" with each other and agree on a common resolution for peace.

"Intrinsic to a fruitful discussion is the necessity that each state recognizes and supports the legitimacy of each other," Bishop David Malloy of Rockford, chairman of the USCCB Committee on International Justice and Peace, said in a Feb. 3 letter to Secretary of State Mike Pompeo.

"The United States and all other interested parties who offer their counsel and aid must do so as contributors to strengthen bilateral agreement between the two principal entities."

Trump and Netanyahu unveiled their plan Jan. 28, which includes an independent Palestinian state with a capital in East Jerusalem.

Despite this, Trump insisted that Jerusalem would also remain "Israel's undivided - very important - undivided capital." The United States moved its embassy in Israel to Jerusalem in 2017.

Despite optimism from the two leaders, the proposal was not welcomed by the Palestinian Authority. President Mahmoud Abbas said the proposal "will not pass." Protests erupted in Gaza following the announcement of the plan, which would involve annexation of Palestinian territory.

Malloy said that "The two principals - the Israelis and the Palestinians - are the only ones who can resolve the differences and agree on a common resolution to the chronic impasse."

"While acknowledging the significant role the United States plays, these principals must negotiate directly with each other with the support of the international community, that they may find a fair compromise, which takes into account the legitimate aspirations of the two peoples."

Under the plan, none of Jerusalem's Old City or territory within the current security wall would be ceded to the Palestinian state. The agreement also preserves the status quo policy regarding control of various religious sites, including the site of the Temple Mount and Al Aqsa Mosque, and, under the proposal, Muslims would still have access to the site.

The plan also proposes the construction of a "West Bank-Gaza Tunnel" to connect the two halves of Palestine, and that a third of the Gaza Strip be designated as a"high-tech manufacturing industrial zone."

As part of the plan, Trump also pledged money to the Palestinian state for job creation and poverty reduction. Trump said that if Abbas and the Palestinian Authority"choose the path to peace," that the United States and other countries"will be there, we will be there to help you in so many different ways."

Malloy noted that both the US bishops and the Holy See have long supported a two-state solution, respecting the rights of both Israelis and Palestinians to "live in peace and security."

Monsignor Fredrik Hansen, chargĂ© d'affaires of the Permanent Observer Mission of the Holy See, affirmed to the UN Security Council Jan. 22 Pope Francis' continued support for a two-state solution and a status quo policy in Jerusalem for shared religious sites.

"Indeed, the appeal to maintain the status quo of the holy sites of Jerusalem, dear to Jews, Christians and Muslims in virtue of their religion and important for the cultural heritage of the whole human family, is one that has been repeatedly made," Hansen said.

Pope Francis, Hansen said, wishes for Jerusalem to live out "its vocation as a city of peace," which can be a symbolic location of peace and encounter, with respect between religions and continued dialogue.

Malloy emphasized that both Israeli and Palestinian leaders must guarantee the rights of Christians to exercise and profess their faith, as well as enjoy free access to shrines and holy sites in the area.

"We shall be one in our prayers that both Palestinians and Israelis be able to live side by side with sovereignty, dignity, and peace," he concluded.

While Israel has strongly backed the US proposal, the European Union on Feb. 4 rejected parts of the peace plan.