'No one ever talked about McCarrick and the boys'

A man claiming to be a former child victim of Theodore McCarrick has written an open essay in response to a recent interview given by the former cardinal. Writing under the name Nathan Doe, the man says that McCarrick sexually abused a series of minors during his years as a cleric. 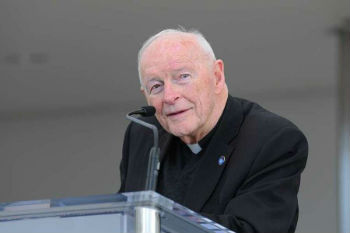 Washington D.C., (CNA) - A man claiming to be a former child victim of Theodore McCarrick has written an open essay in response to a recent interview given by the former cardinal. Writing under the name Nathan Doe, the man says that McCarrick sexually abused a series of minors during his years as a cleric.

Media reports have detailed a string of allegations made against McCarrick since the announcement of a Vatican investigation in June 2018. Those reports have referred to McCarrick's alleged victims as including eight former seminarians and three minors.

"The 'third' accuser they were referring to in those news articles was me," Doe said.

The man says he chose to maintain his anonymity because he does not wish to expose other innocent people to "pain and suffering" by making his name public.

Media coverage of allegations against the former cardinal has focused on apparent crimes against seminarians in the dioceses he led as a bishop, first in New Jersey and later in Washington, D.C.

In some reports, McCarrick's sexual misconduct has been called an "open secret" among those close to him.

"I am not even sure I know what 'open secret' means," Doe wrote in an essay published online on Oct. 17. "What I do know is that no one ever talked about McCarrick and the boys."

A source with knowledge of the Vatican investigation into McCarrick told CNA that the former cardinal is alleged to have regularly invited high school boys to accompany him on trips between 1971-1977, when he served as secretary to Cardinal Terrence Cooke, then-Archbishop of New York.

As previously reported by CNA, during that same period, McCarrick already had a well-established reputation among seminarians as a predator, with one former student at a New York seminary telling CNA last year that "the dean of our theology school was a classmate at CUA with McCarrick, and he knew about the rumors."

The priest told CNA that so well-known was McCarrick's reputation, the priest said, that when McCarrick would accompany Cooke to visit the seminary there was a standing joke that they had to "hide the handsome ones" before he arrived.

Similar accusations were reported by former students at Seton Hall University, home to the Archdiocese of Newark's seminary. An independent report, commissioned in response to reports on the seminary's culture, concluded that as Archbishop of Newark, McCarrick created a "culture of fear and intimidation" at Seton Hall's seminary and "used his position of power as then-Archbishop of Newark to sexually harass seminarians."

In his essay, published on Thursday, Doe said that in addition to these seminary-related allegations, McCarrick abused a group of at least seven boys under the age of 16 when he was a priest of the Archdiocese of New York. Members of that reportedly provided evidence to Church authorities during the canonical penal administrative process which resulted in McCarrick's laicization earlier this year.

"Collectively, we were able to provide law enforcement with names, dates, times, locations, who was present, supporting evidence, and related documentation covering hundreds of Church-related or fundraising-related overnight trips between the years 1970 and 1990 that, as fate would have it, all resulted in McCarrick sharing a bed with a young Catholic boy."

Doe says he recognized his own experience, and those of other minors abused by McCarrick, in the account of James Grien, initially published anonymously in the New York Times last year.

"To varying degrees, Grein's story was our story. I don't know James Grein, have never spoken to him, and I never even knew he existed until that moment, but there were too many details in that interview that only a person in our exclusive club would know."

The report comes just weeks before the U.S. bishops will meet for their third assembly since the McCarrick scandal broke in June 2018. In November 2018, the bishops defeated 83-137 a resolution that would have urged the Vatican to release a comprehensive dossier on McCarrick.

In October 2018, Pope Francis ordered an internal Vatican investigation into the career of the disgraced McCarrick. Results of that investigation have not been released. While many have criticized the delay in making public a report on McCarrick, Doe said he is undeterred by the apparent delay.

"I have no insights at all into who is writing that report and how all of that will work. What I can tell you is that if they had completed and issued their report before today, I would be sitting here telling you that they closed the book too soon," he wrote.

Calling McCarrick a "walking jurisdictional nightmare," Doe said it is important not to "underestimate the sheer volume of information that began coming in last year, the number of different channels that information came in through, and all of the various investigative processes and law enforcement agencies that have been involved with the examination of the information."

"I am personally inclined to grant all of the investigators all the time they need to do whatever work is necessary to get this done right once and for all," he said.

Sources in Rome and Washington have confirmed to CNA that large quantities of documents and a detailed report on archdiocesan records have already been compiled and forwarded to Rome, but the Archdiocese of Washington has repeatedly declined to comment on those records.

In June 2019, Newark Cardinal Joseph Tobin told CNA he was prevented by a state attorney general's investigation from releasing the files and reports compiled by his diocese on McCarrick, who was Newark's archbishop from 1986 to 2000. Tobin is believed to have also forwarded a report to the Vatican detailing McC's time in Newark.

Doe wrote that although he saw the coverage of McCarrick's disgrace, and even though he participated in the canonical process that resulted in the former cardinal's laicization in February, he "never" thought about making a public statement.

"That all changed when I read McCarrick's recent interview with Slate magazine where he attempted to discredit the victims of his sexual abuse while creating further division and confusion within our Church."

In that interview, McCarrick said he is "not as bad as they paint."

"I do not believe that I did the things that they accused me of," McCarrick said, while going on to suggest that his accusers "were encouraged" to come up with allegations by "enemies" of the former cardinal, pointedly referring to former Vatican diplomat Archbishop Carlo Maria Vigano as "a representative of the far right" for coming forward with a series of allegations about McCarrick and apparent Vatican knowledge about his behavior.

Some senior Church officials have told CNA that McCarrick was under consideration for an influential Vatican post in 1999; concerns about the former cardinal's lifestyle are rumored to have played a role in scuttling that plan. McCarrick was nevertheless appointed Washington's archbishop in 2000, where he continued to serve until his retirement in 2006.

Doe said that he was only concerned with the integrity of McCarrick's victims, whom he said McCarrick had further abused by suggesting they were politically motivated.

"For me, this is about our humanity. This is about the criminal, sexual abuse of minors," Doe said.