Speaking at a press conference Thursday on the Vatican's upcoming Amazon synod, Cardinal Lorenzo Baldisseri, head of the Synod of Bishops, played down the importance of the synod's working document, saying it is neither a "papal document" nor "magisterium." 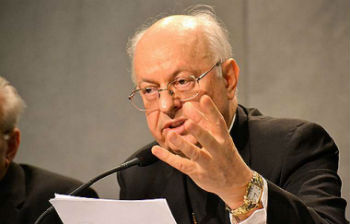 Cardinal Lorenzo Baldisseri Secretary General of the Synod of Bishops

Vatican City, (CNA) - Speaking at a press conference Thursday on the Vatican's upcoming Amazon synod, Cardinal Lorenzo Baldisseri, head of the Synod of Bishops, played down the importance of the synod's working document, saying it is neither a "papal document" nor "magisterium."

In response to a question Oct. 3 about the criticisms some bishops and cardinals have expressed about the working document, or Instrumentum laboris, Baldisseri said, "criticisms are good." The Instrumentum laboris was the work of two years of listening to the questions of people in the Amazon, he stated, saying he thinks "it is necessary to listen and not to judge."

The cardinal also underlined that synod assemblies are consultative, not deliberative, and said the real "final document" of a Synod of Bishops is whatever document the pope may decide to issue afterward, and not the synodal and pre-synodal documents themselves.

"They do not have the signature of the pope," he said, noting that for this reason, he does not think it is necessary to make judgements about the Instrumentum laboris.

Cardinals Gerhard Mueller, Walter Brandmuller, and Raymond Burke have all penned letters or documents expressing concern about some of the content of the Instrumentum laboris of the Oct. 6-27 Synod of Bishops on the Pan-Amazonian region.

"Some points of the synod's Instrumentum laboris seem not only in dissonance with respect to the authentic teaching of the Church, but even contrary to it,"  Brandmuller wrote to fellow cardinals in an Aug. 28 letter obtained by CNA.

Bishop Jose Luis Azcona, the missionary bishop emeritus of Marajo, a diocese that includes dozens of islands in the Amazon River Delta, also said the working document does not address the actual problems faced by the Church in the region.

Cardinal Claudio Hummes, a native of Brazil, is the relator general of the Amazon synod. He is the archbishop emeritus of Sao Paulo and served as prefect of the Congregation for Clergy from 2006-2010.

Hummes said Oct. 3 that the Instrumentum laboris is for the synod, "not of the synod." He added the document it is about seriously listening to the people of the Amazon.

About the issue of ordaining viri probati -- that is, proven, married men -- to the priesthood, one of the themes of discussion promoted in the Instrumentum laboris, Baldisseri said, "you ask" and "you study the possibility."

"The synod fathers are free to discuss it."

One synod father, Salesian Fr. Martin Lasarte, told CNA Oct. 3 that to focus only on the lack of priests in the Amazon region is to miss the deeper, more fundamental questions about Christian life in the region.

Lasarte is participating in the synod as one of as one of 33 members nominated by Pope Francis. He is a coordinator of the Salesian Missions Department, where he helps prepare missionaries. He served as a missionary in Angola for 25 years.