A top UK rabbi has criticized secular groups in Britain for their remarks against religious practices and faith-based schools. 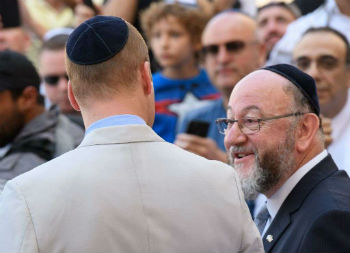 Madrid, Spain, (CNA) - A top UK rabbi has criticized secular groups in Britain for their remarks against religious practices and faith-based schools.

Ephraim Mirvis, Chief Rabbi of the United Hebrew Congregations of the Great Britain and the Commonwealth, spoke at an international interreligious conference held in Madrid this week, addressing comments from groups such as Humanists UK and the National Secular Society.

Mirvis said that "humanism, with a small 'h', sits at the centre of what it means to be a Jew. But there is a different Humanism, with a capital 'H', which I fear is becoming ever-more combative in the way in which it regards faith communities."

"We are finding that, often, Humanism, and other secularist approaches, seek out opportunities to attack faith," said Mirvis, the Jewish News reported.

According to the website for Humanists UK, he said, there has been a campaign against faith-based schools. The charity, which advocates for the rights of non-religious people, is opposed to state-funded religious schools.

"Do I not have the right to educate my children in accordance with the values that I hold dear?" asked Mirvis.

"Those Humanists who campaign against the existence of faith schools are in effect campaigning against my freedom to raise my children in accordance with the tenets of my faith," he added.

Humanists UK Chief Executive Andrew Copson said Mirvis' reaction was unfair, the Jewish News reported. He said the organization has worked with numerous faith groups in the past to ensure "liberal social values." He expressed a desire to have a similar dialogue with the rabbi.

"We are ready to engage likewise with the Rabbi Mirvis at any time to explore what we share and how we can work together towards any shared goals and in the cause of greater mutual understanding," said Copson.

According to The Jewish Chronicle, Mirvis also criticized the National Secular Society's remarks on circumcision. In the past, the group has petitioned to end non-consensual religious surgery, claiming it is genital mutilation forced upon infants.

He was particularly critical of the organization's Chief Executive Stephen Evans, who claimed that religious liberty movements were often a demand for "the state to turn a blind eye to the violation of other's rights." Evans' comment was in regards to circumcision.

"Religious practices aren't beyond reproach and religious groups shouldn't be given a free pass to carry out harmful practices," Evans later added, according to the Jewish Chronicle.

"Secularists seek to ensure that the right to religious freedom is always balanced against other considerations, including the protection of children."

According to the Jewish News, Mirvis respectfully encouraged the group to pursue their convictions, but not to obstruct other pursuits of faith. He said an organization should be defined by "what they live for" instead of identifying themselves by their opposition to other belief systems.

"If it is freedom you seek, please do not campaign against our freedom to practice our faith. If you are calling for tolerance, please do not stoop to intolerance of faith communities and religious practice," he said.

"If you wish to prevent religion from imposing its values on our society, please don't do just that, by seeking to impose Humanism on our society."