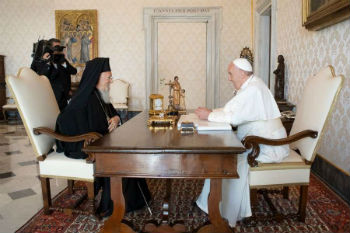 "Many of the theological dialogues pursued by the Catholic Church, especially with the Orthodox Church and the Oriental Churches, are of an ecclesiological nature. They have a canonical dimension too, since ecclesiology finds expression in the institutions and the law of the Churches," Pope Francis said Sept. 19.

Canon law is the Church's legal discipline, it gives expression to concepts like natural and divine law, and orders the Church as an ecclesiastical society. It explains and safeguards the rights and duties of the faithful of all orders of church life: laity, clergy, bishops, and religious.

The pope met with Patriarch Bartholomew I of Constantinople the day prior for lunch in Vatican City. Bartholomew, to whom Pope Francis gifted relics of St. Peter earlier this year, was the law society's first vice president.

Pope Francis said that the Church can learn from the synodal experience of the Eastern churches.

"Synodality expresses the ecumenical dimension of canon law," Pope Francis said, explaining: "the commitment to build a synodal Church - a mission to which we are all called, each with the role entrusted him by the Lord - has significant ecumenical implications."

"How much we can learn from one another in all areas of ecclesial life: theology, the experience of spirituality and liturgy, pastoral activity and, certainly, canon law," he said.

"Based on the common canonical heritage of the first millennium, the current theological dialogue between the Catholic Church and the Orthodox Church seeks precisely a common understanding of primacy and synodality and their relationship in the service of the unity of the Church," Pope Francis said.