Archbishop Dennis Schnurr of Cincinnati has submitted a report to Rome, following criticism of the archdiocese's handling of allegations of sexual abuse against a local priest. 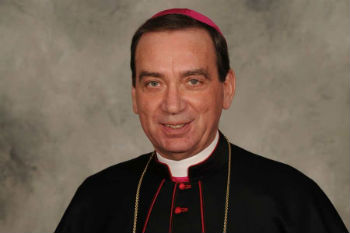 Cincinnati, Ohio, (CNA) - Archbishop Dennis Schnurr of Cincinnati has submitted a report to Rome, following criticism of the archdiocese's handling of allegations of sexual abuse against a local priest.

Archdiocesan officials told CNA Sept. 17 that a complete file on the case of Fr. Geoff Drew has been sent to the apostolic nuncio in Washington, DC, for transmission to the relevant curial departments, expected to include the Congregation for the Doctrine of the Faith.

A spokesperson for the archdiocese told CNA that a "full report" was sent to Rome via the nuncio on Aug. 30, and that Archbishop Schnurr"anticipates that the Vatican may order a full investigation" into the handling of the case.

"Archbishop Schnurr takes any accusations of sexual abuse very seriously, as well as any possible lapse in internal procedures for handling allegations," the spokesperson told CNA.

Fr. Geoff Drew was arrested August 19 on a nine-count indictment for sexual abuse. The charges date back 30 years to before Drew's time in ministry, when he was a music minister at a local parish. The accusations concern abuse said to have taken place over two years, when the reported victim was 10 and 11 years old. Drew pled not guilty during an Aug. 21 arraignment hearing. If convicted, the priest could face life in prison.

At the time of his arrest, Drew had already been removed from ministry following a several of allegations of misconduct with teenage boys which came to light in July and August.

Despite a series of complaints raised over a period of years, Drew had been able to remain in ministry and allowed to transfer from the parish of St. Maximilian Kolbe in Liberty Township, OH, to the parish of St. Ignatius, which is attached to the largest Catholic school in the archdiocese.

The handling of Drew's case by archdiocesan officials, and his ability to transfer to another parish, has drawn heavy criticism from the priest's former parishioners, who have asked how it was possible that a series of complaints was made to Church authorities and forwarded to local law enforcement, but resulted in no action against Drew.

In August, CNA reported that Cincinnati auxiliary Bishop Joseph Binzer had failed to inform Schnurr and the archdiocesan priest personnel board about past allegations against Drew dating back to 2013 and 2015.

As head of priest personnel, Binzer was in charge of the process that considers requests and proposals for priest reassignments, in conjunction with the priest personnel board. Neither the board nor the archbishop were made aware of the multiple complaints against Drew, and a 2018 transfer between parishes was approved for the priest.

On Aug. 6 Binzer resigned from the USCCB's committee on child and youth protection, which advises the bishops' conference on all matters related to safe environment policy and child protection. Binzer had been serving as the regional representative for the dioceses of Ohio and Michigan.

The failure of bishops to act on allegations of sexual misconduct and abuse has been the focus of successive scandals in the Church in the past year. In addition to accounts that accusations against former Archbishop Theodore McCarrick were ignored by Church authorities over a period of years, the release of the Pennsylvania grand jury report revived criticism of past occasions where bishops ignored complaints against predator clergy.

The allegations that Binzer internally withheld the allegations against Drew came just weeks after the USCCB met in Baltimore to adopt measures aimed at building processes to address episcopal misconduct or neglect, and the ongoing crisis of credibility widely perceived to overshadow ongoing work to eliminate sexual abuse from the Church.

These measures included a set of directives applying in the U.S. the new universal norms for investigating allegations against bishops promulgated by Pope Francis in Vos estis lux mundi and which came into force on June 1.

A spokesperson for the archdiocese could not confirm whether Archbishop Schnurr had included a request for an investigation into Binzer's conduct under the provisions of Vos estis, in the report submitted at the end of August, or whether Binzer will be the subject of the "anticipated" Vatican investigation.

"Archbishop Schnurr sent the full report to Rome on the whole case and he is waiting for the Vatican's response," the spokesperson told CNA.