A network of wealthy donors is funding a series of well-organized lobbying campaigns to restrict legal protections for religious freedom, in order to advance access to abortion and LGBT causes. 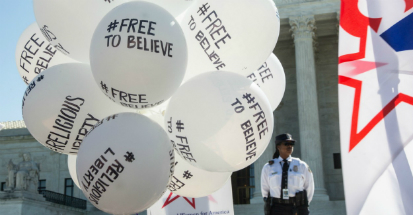 Religious Freedom is our first freedom, and the reason why millions have come to America.

Denver, Colo. (CNA/EWTN News) - Since 2013, a network of funders has earmarked at least $8.5 million in grants for projects intended to limit religious freedom provisions in federal, state, and local law, according to a CNA investigation of grant listings and tax forms.

Many of these funders are part of the Rights, Faith & Democracy Collaborative, a grantmaking fund launched by the Proteus Fund in March 2017. The collaborative opposes "the inappropriate use of religious exemptions to curtail reproductive health, rights and justice, discriminate against members of the LGBTQ community, and otherwise undermine fundamental rights and liberties essential to a healthy democracy," the fund's website says.

The new anti-religious freedom collaborative was created to oppose "ongoing and growing efforts in too many states to 'legalize' discrimination and restrict fundamental human and civil rights under the guise of protecting 'religious liberty'," according to the fund's website.

The Rights, Faith & Democracy Collaborative has given grants to pro-abortion groups and LGBT advocacy groups at the state, federal and international levels; religious groups including Catholics for Choice; legal advocacy groups like the ACLU and Lambda Legal; and aligned academics, including those at Columbia Law School's "Public Rights, Private Conscience Project."

One donor, the Arcus Foundation, has given hundreds of thousands of dollars to John Podesta's Center for American Progress initiatives. These grants seek to redefine religious liberty as "a core progressive American value that includes LGBT equality and women's reproductive health and rights," according to its latest grant listed at the Arcus Foundation website.

The Rights, Faith & Democracy Collaborative says it will serve as "a vehicle for broader donor education and mobilization in order to achieve deeper funding alignment as well as enhanced donor collaboration."

The collaborative aims to nurture strategies and organizations that foster collaboration between "the reproductive equity and LGBTQ movements, especially at the state and local level." It aims to boost the influence of faith leaders and religious communities that it says will support "equal rights and opportunities for everyone while also protecting legitimate constitutionally protected religious liberty rights." Its website also claims that "discriminatory practices fostered by overly broad religious exemptions" have a disproportionate impact on racial minorities.

The Proteus Fund appears to have had previous success. Its Civil Marriage Collaborative, closed in 2015, was a leader in the push for legal recognition of gay marriage. The fund's "Hearts & Minds" report says that the consortium of foundations invested $153 million over 11 years in many states and at the national level in marriage-related advocacy.

CNA contacted the Proteus Fund for comment, but received no response by deadline.

Richard Garnett, a professor at the University of Notre Dame Law School, disagreed with the fund's claims that religious freedom legal accommodations and exemptions are illegitimate. He said this claim is "inconsistent with our history and with our longstanding commitment to religious liberty as our 'first freedom.'

"Reasonable exemptions do not 'undermine fundamental rights and liberties,' they protect and promote them," he told CNA.

"Unfortunately, there are powerful and well-funded interests who, with broad support in the academy and in media, have been working hard to associate our 'first freedom' with discrimination and prejudice," Garnett said.

He reflected on the state of religious freedom advocacy.

For Garnett, the fund's rhetoric about discrimination concerns did not accurately represent the current state of the law.

"In fact, only a tiny number of religious-exemptions claims involve antidiscrimination laws and these claims almost always fail," he said. "The claim that religious-liberty laws undermine important anti-discrimination protections in the marketplace, the workplace, or in public accommodations is false.

Religious freedom protections have become more controversial in recent decades. In 2012, the Obama administration attempted to mandate that all employers, including religious employers, cover sterilization and contraceptive drugs, including drugs that can cause abortions. The mandate burdened many Catholic dioceses and organizations, including EWTN Global Catholic Network, and was only changed by a recent Trump administration action.

There is also an ongoing push in some states to require insurance coverage of abortions, and some medical professionals and hospitals have faced pressure to cooperate in providing abortions.

Garnett thought abortion would be a prime focus of the Proteus funding network.

"My sense is that what efforts like the Proteus Fund are really aimed at is undermining the longstanding protections in American law for religious health care workers and institutions who cannot in conscience participate in abortions," he said. "These protections are falsely labeled as 'discriminatory' when, in fact, they reflect the commonsense notion that it would be deeply unjust to require, as a condition of working as a healer, a pro-life medical professional to participate in a procedure she believes to be gravely wrong."

Some Christian adoption agencies have been forced to close because placing children with same-sex couples violates their religious convictions. There is an ongoing debate over whether small businesses in the marriage industry must cater to same-sex ceremonies if they have religious objections to them.

Ryan T. Anderson, a senior research fellow at the Heritage Foundation and co-author of "Debating Religious Liberty and Discrimination," reflected on the current situation.

"Anti-gay and anti-transgender bigotry exists and should be condemned," he told CNA. "But support for marriage as the union of husband and wife isn't anti-gay. Nor is the conviction that sex is a biological reality anti-transgender.

"Just as we've combatted sexism without treating pro-life medicine as sexist, any public policy necessary to help people who identify as LGBT meet their needs should be crafted so as to respect the consciences of reasonable people, acting on good-faith beliefs about marriage and gender identity," said Anderson. "Not every disagreement is discrimination. And our law shouldn't suppose otherwise."

'We're going to punish the wicked'

One of its funding partners, the Colorado-based Gill Foundation, was launched by the politically savvy former businessman Tim Gill. He has pursued strategic LGBT advocacy through funding both non-profits and political campaigns.

"We're going into the hardest states in the country... we're going to punish the wicked," Gill said in a June interview with Rolling Stone magazine about his LGBT activism.

In March 2015, Tim Sweeney, a former president and CEO of the Gill Foundation,  told leading business executives and others attending the Out & Equal Workplace Advocates executive forum in San Francisco about the need to ensure their fight against religious exemptions is finished quickly.

"We are at a crossroads where the choices we make will mean we will fight religious exemptions for two to three years or have a protracted twenty year struggle on our hands," he said.

However, the Oakland, Calif.-based Groundswell Fund board of directors is chaired by Rocio L. Cordoba, a past program officer for the Ford Foundation's Gender, Sexuality and Reproductive Justice Program. The Groundswell Fund claims to fund more reproductive justice organizations than any other foundation.

Another partner, the Rockefeller Family Fund, was launched in 1967 by members of the prominent American family, including then-New York governor and future vice-president Nelson Rockefeller. Its mission statement says it "initiates, cultivates, and funds strategic efforts to promote a sustainable, just, free, and participatory society." The fund did not respond to a request for comment by deadline.

The San Francisco-based Evelyn and Walter Haas Jr. Fund is a private family foundation with half a billion dollars in assets. Since 2014 it has earmarked at least $1.4 million in grants for projects related to religious exemptions, according to a CNA review of its grant listings.

The New York-based Overbrook Foundation, founded in 1948 by financier Frank Altschul and his wife Helen, has a gender rights program to fund those who oppose "overly broad religious exemptions." Its website listed $220,000 in grants related to religious freedom: a $100,000 grant to the Proteus Fund's collaborative, and two $60,000 grants to Lambda Legal.