A Colorado baker's fight to maintain his freedom of expression could be the most influential religious freedom decisions of the US Supreme Court in years, as the court considers the case this term. 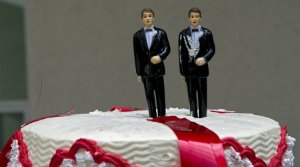 Will Christians be forced to participate in activities that are against their sincerely held religious beliefs?

Washington D.C. (CNA/EWTN News) - "There is far more at stake in this case than simply whether Jack Phillips must bake a cake," the US bishops' conference and other Catholic groups stated in an amicus brief in Masterpiece Cakeshop v. Colorado Civil Rights Commission. "It is about the freedom to live according to one's religious beliefs in daily life and, in so doing, advance the common good."

Phillips had started his business in 1993 as a way to integrate his two loves -- baking and art -- into his daily work. Philipps named his shop "Masterpiece" because of the artistic focus of his work, but also because of his Christian beliefs. He drew from Christ's Sermon on the Mount in the Gospel of Matthew, specifically the commands "no man can serve two masters" and "you cannot serve both God and mammon."

"I didn't open this so I could make a lot of money," Phillips said of his business. "I opened it up so that it would be a way that I could create my art, do the baking that I love, and serve the God that I love." Phillips spoke last Wednesday at the Heritage Foundation at a panel event on his upcoming Supreme Court case.

One day in July of 2012, two men walked in to Masterpiece Cakeshop and began looking at pictures of wedding cakes. Phillips approached them and quickly ascertained that they were planning their own wedding and had wanted him to bake them a cake for their same-sex wedding.

"Right away, I'm thinking 'how can I tell them politely that I can't take care of this wedding for them, because I don't do same-sex weddings'," he recalled.

Phillips explained to the couple that he could not serve same-sex weddings -- to do so would have been a violation of his Christian beliefs. He said has declined to make a number of types of cakes, including cakes for Halloween, bachelor parties, and a divorce, cakes with alcohol in the ingredients, and cakes with atheist messages.

Once they heard they would not be able to buy a cake from Masterpiece, the couple stormed out of the store angrily. During the ensuing hour, Phillips said his store received about a half-dozen threatening phone calls. Days later, he received a death threat where he had to call his sister, who was at the store with her four year-old daughter, and tell her to hide in the back of the store until police arrived on the scene.

The couple, meanwhile, filed a complaint with the Colorado Civil Rights Commission for discrimination.

Alliance Defending Freedom took up Phillips' case in court. He lost before an administrative judge in 2013, who ruled that the state could determine when his rights to free speech unlawfully infringed upon others' rights.

The case was appealed to the Supreme Court. It was re-listed repeatedly throughout the winter and spring of 2017, before the Court finally decided to take the case in June, at the end of its term.

Once the case is decided at the Supreme Court, the ruling is expected to cap one of the most decisive religious freedom cases of this century.

"It has been said, and I think accurately so, that this could be one of the most important First Amendment cases in terms of free speech and the free exercise of religion in a century or more, and it could be a landmark, seismic kind of case of First Amendment jurisprudence," Rep. Mike Johnson (R-La.) stated at a Thursday press conference at the U.S. Capitol.

As state amendments defining marriage as between one man and one woman were declared unconstitutional by the court in Obergefell v. Hodges in 2013, states have also begun enforcing laws against discrimination on basis of sexual identity. The conscientious refusal of certain business owners, like florists and bakers, to serve same-sex weddings has been ruled unlawful in several states, including Colorado.

In Phillips' case, he has a right to freedom of expression as an artist, Alliance Defending Freedom has argued, and this right has been recognized as protected by the First Amendment. If the Supreme Court rules in Phillips' favor in this case, it could have ramifications in other cases where business owners face discrimination lawsuits.

"The Supreme Court has said that things like that [art] are covered under the protection of the First Amendment," Kristen Waggoner, senior vice president of the U.S. legal division for ADF, stated at the Heritage Foundation panel event.

Throughout the ordeal, Phillips has paid a heavy price for his stand. He has lost 40 percent of his family's income and more than half his employees, he said.

The initial briefs have been filed with the Supreme Court. Amicus briefs are currently being filed, the opposing briefs will come in October, and the reply of ADF to those briefs the following month. The case will likely be decided late next spring.

ADF has argued in its brief before the Supreme Court that the rulings by the state's court of appeals and human rights commission that the state can determine which free artistic expression is protected under the First Amendment stands in flagrant opposition to the original meaning of the Constitution.

"But just as the Commission cannot compel Phillips's art, neither may the government suppress it," ADF stated.

Instead, the conflict between Phillips' freedom as an artist and the wishes of his customers should be solved by the citizens themselves, and not by the government, ADF said.

"There is a better way -- one that allows the Commission to ensure that businesses do not refuse to serve people simply because of who they are, but protects individuals like Phillips from being forced to create expression about marriage that violates their core convictions," ADF's brief stated.

"The path to civility, progress, and freedom does not crush those who hold unpopular views, pushing them from the public square," ADF said. "It allows free citizens to determine for themselves 'the ideas and beliefs deserving of expression, consideration, and adherence'."

The U.S. Conference of Catholic Bishops, along with the Colorado Catholic Conference, the Catholic Medical Association, and other Catholic non-profits have also weighed in on the case, submitting an amici curiae brief on behalf of Masterpiece Cakeshop.

Religious freedom must never mean just the freedom to worship or the freedom to practice one's religion in private, the brief said. The First Amendment's Free Exercise Clause "guarantees every individual the right to seek the truth in religious matters and then adhere to that truth through private and public action."

In an apostolic exhortation on the proclamation of the Gospel, Pope Francis recently insisted that "no one can demand that religion should be relegated to the inner sanctum of personal life, without influence on societal and national life, without concerns for the soundness of civil institutions, without a right to offer an opinion on events affecting society."