A victory for Christianity - President Trump bans transgenderism in the military

President Trump has announced that the military will not "accept or allow" transgender people to serve in the military. The basis of his decision was cited as cost. 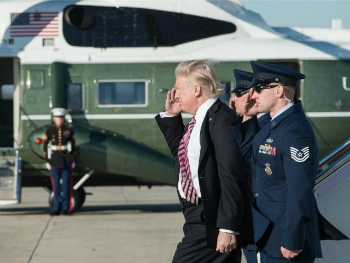 President Trump has banned transgenderism in the military.

LOS ANGELES, CA (California Network) -- This morning, President Trump tweeted: â€˝After consultation with my Generals and military experts, please be advised that the United States Government will not accept or allow Transgender individuals to serve in any capacity in the U.S. Military. Our military must be focused on decisive and overwhelming victory and cannot be burdened with the tremendous medical costs and disruption that transgender in the military would entail. Thank you"

The decision by President Trump reverses an earlier, Obama-era decision that such people could serve openly in the U.S. military.

President Trump cited the costs associated with transgenderism in the military. A bill is being debated on Capitol Hill to provide the Pentagon with over $700 billion in funding. Several members of Congress have pitched bills that would ban the military from paying for transition surgery or hormone therapy involved with gender reassignment.

Rep. Vicky Hartzler (R-MO) tweeted in response, "Pleased to hear that @realDonaldTrump shares my readiness and cost concerns, & will be changing this costly and damaging policy #readiness."

While most Americans have little to no opinion on transgenderism, or actually favor its inclusion in society, it is against moral law, according to the Church. Each person's sex, as male or female, is determined by DNA, and cannot be changed by surgery, drugs, or dress. As a legal matter, people can transition from male to female or back again, but the law is not always moral or just.

Pope Francis explained in Amoris Laetitia, â€˝the young need to be helped to accept their own body as it was created."

At the same time, people with these issues should be treated with love and compassion. But this does not mean we must embrace the pop-culture redefinition of sex as something that can be changed like clothing or a hairstyle.

As for the military, President Trump is right. The military must be focused on winning battles, and on being prepared to win. Anything that subtracts from this purpose should be reevaluated, from sexual reassignment surgery, to the development of weapons, programs, and other activities not associated with their primary purpose.

Several conservatives, as well as Christians have praised the President's decision. According to insiders, President Trump was advised in part by the Family Research Council, which also supported an end to the military's transgender policy.