Free World Class Education
FREE Catholic Classes
Hillary Clinton should be in a hospital, not the Oval Office.

Hillary Clinton is very sick, and we are about to hand her the keys to the White House. We cannot have a president with a neurological condition in office. New evidence and information hint at the shocking severity of her illness. 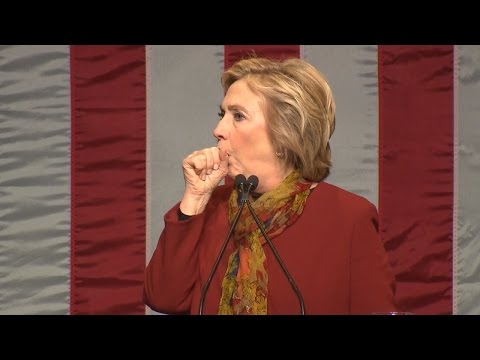 LOS ANGELES, CA (California Network) - Hillary Clinton is sick. According to a plethora of evidence, she may have a neurological condition. This condition includes dementia. Dementia can significantly shorten a person's life.

If Clinton were a sitting president, this diagnosis alone would be grounds for resignation. Despite the distinct likelihood this is true, Clinton and the Democratic National Committee continue to press onward.

Throughout the campaign, cameras have caught glimpses of Hillary Clinton coughing, wheezing, stumbling, and stuttering. There appears to have been a tumor on her tongue, now removed leaving a hole. One of her staff has been photographed carrying a pen for emergency injections.

And now there appears to be a leak from a New York medical office that shows a diagnosis. According to the leaked document, Clinton was diagnosed with "Complex Partial Seizures, and Subcortical Vascular Dementia."

The document said Clinton reports "blacking out, uncontrollable twitching, and memory loss." The second page of the report says Clinton is, "starting to become depressed and frustrated... she had been experiencing more frequent mini seizures causing her to black out for short periods of time."

To address the condition, Clinton's doctor "raised the dosage on her antidepressants and anxiety medication." The fact is, she should be in a hospital or at home, not running for office.

The document has not been verified and if it is genuine, then whoever is responsible has broke the law. The document allegedly comes from the office of Lisa R. Bardack, M.D., of the Mount Kisco Medical Group in Mount Kisco, New York.

Hillary Clinton is almost 69 years old. It is reasonable to expect a person of her age to have some medical issues. However, Clinton is not retiring from work. Instead, she is running for president, possibly the most stressful job in the world. The health of our commander-in-chief is a national security issue.

Historically, presidents have worked hard to conceal health conditions from the public. Roosevelt had polio, although the public was aware he still concealed the severity of the case. JFK had severe back pain, was dependent on medication, and had Addison's disease.

Ronald Reagan may have had Alzheimer's disease during his second term, but there was no diagnosis. That Reagan was ill during his term of office is highly speculative, and there is no evidence he tried to conceal anything.

It is the nature of power to acquire more and relinquish none. This is an illness in itself and it perfectly describes Hillary Clinton's ambition.


Hillary Clinton is asking for the toughest job on the planet. She is also deceiving the public about her health. The fact she does not have the integrity to be up front with the American people should be enough discouragement for anyone who considers voting for her. The fact that she continues to lead in the polls reveals the stark weakness of the Trump campaign as well as the gullibility of the American people.

If Clinton wins, we should not be surprised at the terrible things that will follow.