Are the Clintons mass murders? Death of British spy who hacked them raises old questions about the Clinton thuggery machine

The Clinton death toll is simply astounding. Approximately 100 people, directly associated with the Clinton family, have died under unnatural and mysterious circumstances since the early 1990s. It is considered possible that the Clinton family chooses to deal with threats to their power by unconventional means. 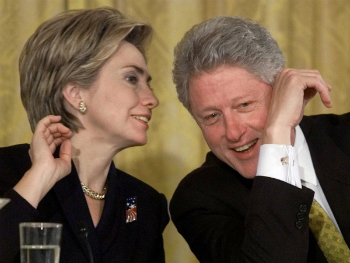 They may be the most evil family in modern American politics.

LOS ANGELES, CA (Catholic Online) - It sounds like a conspiracy theory, and it is widely regarded as such, but the numbers don't lie. Over 100 people associated with the Clinton family have met unnatural and untimely deaths. Several of these people were regarded as threats to the Clinton family, whether they be investigators, key witnesses, or to have inside knowledge of the Clinton family's dealings. At least one former Green Beret claims to have been hired by the Clintons to kill people, as a routine job.

Snopes may not buy it, but the body count is high and the associations are close. In one case, British spy, Gareth Williams, was found dead in his London flat, stuffed into an oversized bag in his bathtub. The unsolved murder took place in 2010. To this day, his cause of death remains undetermined. His crime was using his skills to hack into a Clinton database to retrieve a guest list for an event Bill Clinton was expected to attend. The breach infuriated his bosses at MI6. The Russians, American and his own agency all had motives to kill him. Voicemail messages he left for others were deleted, something only a spy agency could likely do. Why was he killed? Nobody can say for sure.

Light a prayer candle now. Pray for our nation!

His case is the most recent and prominent one, but it's no more mysterious than the deaths of others like Vince Foster, who in 1993 was found dead on a park bench, an antique revolver in his hand. He allegedly shot himself in the head, but critics say the circumstances of his death don't fit a suicide. Foster had inside knowledge of the Clinton's scandalous Whitewater land deal, and had filed several fraudulent tax returns for the family. He was formerly their lawyer and served as White House council, so he would have known many intimate details of the Clinton's affairs.

Ron Brown, former DNC chairman and Secretary of Commerce died in a plane crash in Croatia with 34 others. His skull was said to have a bullet wound, although this is disputed. The crash was blamed on pilot error and navigation equipment failure. Many investigators suggest this could be evidence of sabotage.

To corroborate the claim, Larry Nichols, a former Green Beret, told radio show host, Pete Santilli in 2013 that he was hired to kill people for the Clinton family. They even had a protocol established for killing people, in which he would receive a call on a special line. If that line rang, it meant he was to kill the person who was mentioned.

It is unlikely that the Clintons were directly involved in several of these deaths, but in some high-profile cases, the motive and the means exist. And the circumstances remain suspicious.

No other family in American political history has as much dirt as the Clintons. If they are innocent, then why  have there been so many deaths related to their rise to power? Why is it people get chills, just thinking about them? Hillary Clinton for example, gets the lowest marks for credibility of any contender for president. The reason is simple. The Clintons are self-serving and ruthless. It rises like a stench from their façade of fake smiles and overpriced, stilted public appearances.

Do we REALLY want Hillary to be President? Watch "What Difference Does it Make?"

This family cannot be permitted to remain in power any longer. Furthermore, the truth must come out. Their crimes must be exposed. It can only be hoped that Hillary Clinton's flagrant abuse of the law, in carelessly stashing state secrets on an email server, housed in an apartment bathroom closet, will result in her jailing.

Outside of that, justice will be up to God, for all the witnesses on Earth seem to be dead.